PM commissions HMJS Nanny Of The Maroons into service 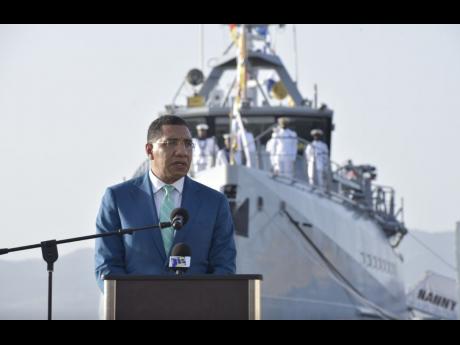 Prime Minister Andrew Holness, speaking on Wednesday at the ceremony for the commissioning into service of the HMJS Nanny of the Maroons vessel at the Coast Guard headquarters in Port Royal, Kingston.

He said the acquisition of the offshore patrol vessel is in keeping with the Government’s commitment to a comprehensive and strategic approach to making Jamaica a safe and secure place.

Holness said that safeguarding the country’s maritime borders is imperative for national security and sustainable development, including protecting critical infrastructure and, most importantly, lives.

He noted, however, that while Jamaica’s location gives it natural advantages for shipping and trade, it also places the country on the prime transhipment route for criminal networks dealing in guns, drugs and human trafficking.

“So, the very advantage of our location is also a disadvantage and, therefore, we must invest in our capabilities to keep our maritime domain safe and secure,” Mr. Holness said

The Prime Minister said, further, that without vessels such as the HMJS Nanny of the Maroons, the country’s borders would also be left vulnerable to illegal fishing by foreign ships.

He said that the HMJS Nanny of the Maroons will also be used to carry out surveillance and rescue missions.

Holness said that naming the vessel after Nanny of Maroons is fitting, as the national heroine was an outstanding military leader and a symbol of unity and strength during times of crisis.

Minister of National Security, Dr Horace Chang, in his address noted that the acquisition is in keeping with the Government’s focus on strengthening the country’s security apparatus.

He said that protecting the country’s borders and maritime space is critical to economic development and national security.

“The illicit trade in guns, drugs and persons that takes place on the high seas feed directly into the violent criminal activities that happen in our society. Therefore, it is strategically prudent that we intercept them before they get to our shores,” he noted.

For his part, Chief of Defence Staff, JDF, Lieutenant General Rocky Meade, said the HMJS Nanny of the Maroons, which is the first of four Hero-class offshore patrol vessels, represents a continuation of the JDF’s efforts to become a more efficient and effective force across all operating domains – land, sea, air and cyber.

The other three vessels to come, he said, will facilitate the establishment of the second district JDF Coast Guard, which will be based in western Jamaica.