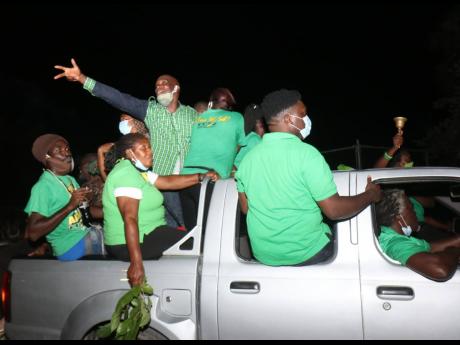 Supporters of the Jamaica Labour Party in Clarks Town, Trelawny, on Monday when Prime Minister Andrew Holness toured the area.

Andrew Holness is seeking to become the first prime minister in 18 years to win a general election that he has called.

Holness, who has taken on the moniker of Bro Gad, yesterday announced September 3 as the date for Jamaica's 18th general election. Nomination Day is August 18.

"I see it necessary to seek another mandate from the people," Holness said in the House of Representatives yesterday. "I cannot recall there being a Government before that has enjoyed the sustained approval rating since this Government, so late in our term and even after facing an extensive crisis of the nature of a pandemic."

It would be the second time in the country's history that a general election is being held on September 3.

The JLP win ended the PNP's 18 and a half-year run in office. Simpson Miller, the person who called that election, suffered the indignity of being the first person since Edward Seaga in 1989 to call an election and lose. Holness, who called the 2011 general election, three months after succeeding Bruce Golding as Prime Minister, went on to lose at the polls to Simpson Miller's PNP. Holness, however, would rebound to register a shocking one-seat victory in the 2016 general election.

PNP President Dr Peter Phillips, who has trailed Holness in every opinion poll since taking over the party, expressed confidence that his party could secure victory in the upcoming elections. He has pointed to governance issues such as corruption and high crime as failures of the Holness administration.