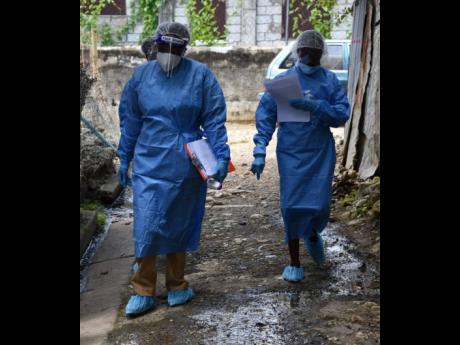 Jamaica has recorded 383 cases of COVID-19 in the last five days with a staggering 116 positive cases recorded on Sunday.

Having recorded the first case on March 10, it took the country 49 days to reach the 381 cases.

Health minister Dr Christopher Tufton yesterday blamed irresponsible Jamaicans for the spike following the lifting of restrictions that were imposed during the early phase of COVID-19 in the country. Some 19,000 people, most of whom have returned from overseas, are now required to be in home quarantine but Tufton said many of them are not abiding by the guidelines to stay at home. The Government had imposed tight restrictions such as the imposition of curfew and the closure of bars and entertainment venues to help keep the numbers low. "Once we started to remove those restrictions, there is a sense that persons started to become complacent. In other words, people were happy for the easing of the restrictions but were not sufficiently sensitive to the need to comply with the protocols that would go with those restrictions being lifted," Tufton said.

Meanwhile, despite the rise in the COVID-19 numbers, the health ministry said that Jamaica is not losing the battle to contain the virus. Dr Jacquiline Bisasor-McKenzie, the chief medical officer, said that the numbers will continue to rise, but what is most important is preventing deaths and reducing the number of persons classified as moderately or critically ill. As of yesterday, Jamaica had 1,529 cases of COVID-19, with four persons critically ill and four moderately ill patients. Sixteen persons have died from the disease. "We are at a point now where we have to be fighting harder because we are seeing more cases of moderate to severely ill persons," she said.

She said that managing the virus becomes more difficult when healthcare workers are infected with the virus and the health facilities become challenged with the management of the cases. A total of 17 health workers, eight at the Kingston Public Hospital, including two doctors, have tested positive for the virus. Of the 315 COVID beds, 73 are now occupied.

Tufton noted that the ministry shifted its strategy from preventing COVID to living with the virus when the Government decided to lift restrictions, while involving opening the borders and implementing home quarantine. "The issue becomes how do we manage it," he said. "Too many of us are not complying with the protocols. We would not have had this level of spike."

Amid the spike in COVID-19 cases, Prime Minister Andrew Holness yesterday suspended his campaign activities, which means he is unlikely to be on the road drumming up support for candidates running on the Jamaica Labour Party (JLP) ticket for the September 3 general election.

Commissioner of Police Major General Antony Anderson has been ordered quarantined at home after he tested positive for the novel coronavirus.

Tufton, when asked whether he may have exposed Holness and Opposition Leader Dr Peter Phillips to the virus, said he was not sufficiently informed to provide a response.