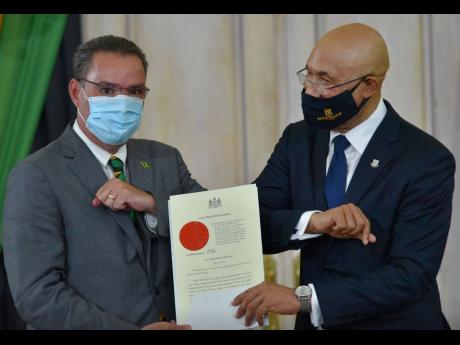 Governor-General, His Excellency Sir Patrick Allen (right), congratulates Minister of Energy, Science and Technology, Daryl Vaz (left), after presenting him with the Instrument of Office at the swearing-in ceremony for Cabinet Ministers at King’s House on Sunday

Newly appointed Minister of Energy, Science and Technology, Daryl Vaz, has committed to addressing the issues of high electricity bills and the quality of telecommunications services offered to Jamaicans, as he assumes his new portfolio responsibilities.

Following the swearing-in of Cabinet Ministers at King’s House on Sunday, Minister Vaz said that “the vexing issues for the public will have to be addressed first and that is the situation with the light bills and also the poor service with the phones and Internet. This is especially in light of the pandemic, where there are so many thousands of persons at home, especially schoolchildren and with back-to-school.”

“So I am going to have to work very closely with the Ministry of Education and get some things done very quickly, so that will definitely be our priority in light of the fact that school is about to reopen,” he pointed out.

Minister Vaz said that at the end of the day, he wants to ensure that Jamaicans have access to reliable telecommunications services.

“Whether or not there is need for additional players that is something that will also be addressed. Competition drives efficiency and, of course, prices,” he pointed out.

He said that the matter of net metering and digitisation will also be among the priority areas.

Minister Vaz added that he is looking forward to getting a full brief this week, “getting myself familiarised and acclimatised and get going fully because it’s a tall order and, of course, I would want to make the Prime Minister, the Government and the people of Jamaica proud.”

He said that he will outline in detail his plans for the Ministry in short order.

He has also served as Minister of State in the Office of the Prime Minister with responsibility for Project Implementation and Service Delivery and was Opposition Spokesman on Land and the Environment.