New e-traffic ticket system to be piloted by month-end 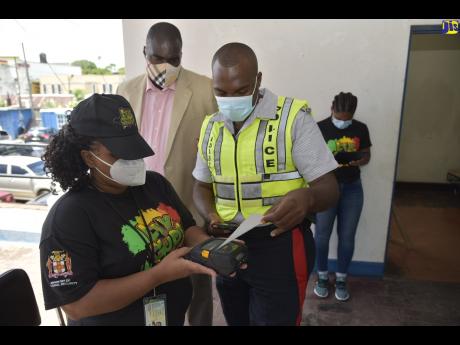 Mario Dawson (left) of the Ministry of National Security's technology division, demonstrates the use of a handheld device, to be used as part of the electronic traffic ticket system, to Corporal Orlando Richards.

The pilot project for the Jamaica Constabulary Force (JCF)’s new electronic traffic ticket system is expected to be launched by the end of this month.

Director of Organisational Transformation in the Ministry of National Security, Lt. Col. Trevor O. McCurdy, said that some 100 handheld devices will be rolled out across selected parishes for the pilot phase.

He said that the participating parishes will be determined by the JCF high command.

The devices will allow for electronic recording of tickets, eliminating the need for manual data entry, and give officers the ability to reference driver and vehicle information, including ticket history, outstanding tickets and warrants.

Through the programme, all traffic tickets issued with the devices will instantly be uploaded to a centralised database, which is accessible by the JCF, the traffic courts and all other government agencies that depend on accurate, timely traffic ticket information to fulfil their mandates.

Lt. Col. McCurdy was addressing a sensitisation session with police personnel at the Mandeville Police Station in Manchester on Friday (September 11).

“The aim of the sensitisation is to enable the users of the new equipment to own it, and it will give them the feeling that man and equipment are one,” he said.

Lt. Col. McCurdy noted that the pilot is expected to last three months and eGov Jamaica will be handling all the challenges experienced during the testing phase.

Meanwhile, head of the Manchester police, Superintendent Gary Francis said that the new traffic ticket system is in keeping with the Government’s efforts to increase efficiency and effectiveness in policing.

“This is one step in that direction, which will create efficiency in the time used to write a ticket. It will lead to greater accountability because all information will be stored in a central database,” he said.

He said that the new system will eliminate the scores of records now being used to keep track of traffic tickets and will improve the operations of the JCF.

“It is easier to use and it is in line with the way that the country is moving in terms of using technology to deliver better customer service while leading to better policing,” Superintendent Francis added.