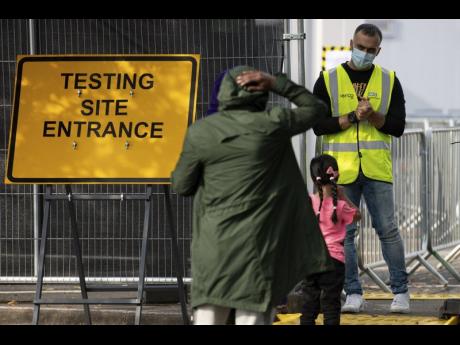 People talk to staff at the entrance to a coronavirus testing facility in Sutton Coldfield, England, Tuesday Sept. 13, 2020. New measures are in place banning people from different homes from meeting together in some English cities, in response to a local rocketing coronavirus infection rate, although there is widespread criticism over the availability of testing facilities. (Jacob King/PA via AP)

LONDON (AP) — Hospitals in England say a shortage of COVID-19 tests in the United Kingdom is jeopardising medical staffing and preparations for a potential surge in coronavirus cases this winter.

Inadequate testing is leading to increased absences in the National Health Service as medical workers are forced to self-isolate while they and their family members wait for test results after possible exposures, according to NHS Providers, a group that represents hospitals. Last weekend hospital leaders in three different cities raised concerns about testing, said Chris Hopson, the group’s CEO.

“The problem is that NHS trusts are working in the dark — they don’t know why these shortages are occurring, how long they are likely to last, how geographically widespread they are likely to be and what priority will be given to healthcare workers and their families in accessing scarce tests,″ Hopson said Tuesday.

The shortage comes amid a surge in COVID-19 cases across the UK that has pushed daily new infections to levels not seen since late May and has forced the Conservative government to impose new limits on public gatherings.

The problem is that the “second wave″ of the virus is hitting Britain earlier than anticipated, said John Bell, a professor of medicine at the University of Oxford.

Authorities have underestimated the speed at which more testing capacity is needed, Bell said, warning that the problem could get worse.

“I think what’s going wrong is the second wave,″ Bell told the BBC.

“A month ago, they had spare capacity in testing —significant spare capacity — but I think what has been underestimated was the speed at which the second wave would arrive.”

He also said new testing pressures are arising from children returning to school.

Over the past week, many people have complained that they were being sent to testing centers far from their homes, sometimes hundreds of miles away.