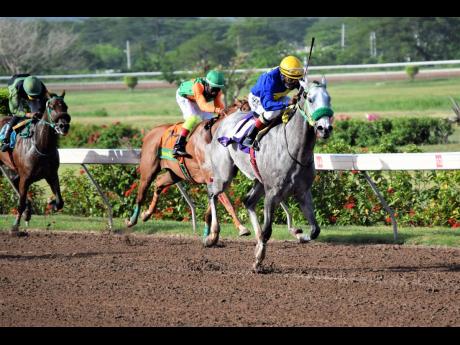 ENUFFISENUFF (right), ridden by Dane Nelson, on the way to winning the eighth race at Caymanas Park on Sunday, July 26.

Almost three-quarters of the 12-horse field are outright sprinters, banking on speed to outgun each other. However, none of the speedsters have won a race since reporting off their respective COVID-19 lay-ups whereas ENUFFISENUFF is on a hat-trick after posting impressive times in back-to-back victories.

JAMAI RAJA, ZEPHYR, GOD OF LOVE, PEKING CRUZ, HARRY'S TRAIN, NUCLEAR THUNDER and ROJORN DI PILOT will be cutting each other's throats from the word go with one thing in common, most sitting near the top of the scale, which could lead to a collapsing pace inside the last furlong.

ENUFFISENUFF comes in at a handy 117lb with finishing speed that took him home in 1:05.3 for five and a half furlongs on August 6, five days after FATHER PATRICK had clocked the exact time in the Betting Gaming and Lotteries Commission (BGLC) Trophy, beating WARTIME, GOD OF LOVE, CORAZON, PEKING CRUZ and ROJORN DI PILOT in that order.

The BGLC Trophy has proven to be a marker race from which WARTIME and CORAZON have emerged as winners. GOD OF LOVE, PEKING CRUZ and ROJORN DI PILOT also returned to either place or run creditable races in defeat.

Despite the older horses' decent form and being seasoned at the overnight allowance level, four-year-old ENUFFISENUFF's consistency, relatively light weight and finishing speed makes him a major threat inside the last half-furlong.

Trained by Philip Feanny up to New Year's Day, ENUFFISENUFF went on a near six-month break, returning as an Anthony Nunes runner on June 20, the first meet after the COVID-19 break, placing third behind DUKE and ACTION RUN at five furlongs straight.

Roughly two weeks later, ENUFFISENUFF just failed to catch TOP SHELF at five and a half furlongs. He made no mistake in his next two outings, putting away BEACH BOY at five furlongs round before collaring TRULY AMAZING and FORMAL FASHION to post a zippy 1:05.3.

ENUFFISENUFF appears vastly improved, clocking a bullet 1:00.3, easily, at exercise last Saturday morning. Post-position two isn't necessarily a bad from which ENUFFISENUFF could ride the rail into the straight, saving ground and energy to launch his attack as the freshest horse in the stretch run.