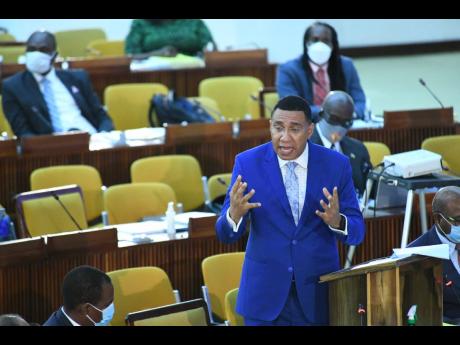 Prime Minister Andrew Holness speaking at the sitting of the House of Representatives at the Jamaica Conference centre on Tuesday.

Prime Minister Andrew Holness has waved the possibility of merriment during the Christmas season before the eyes of Jamaicans, telling nationals that his government may relax curfew measures in December if they adhere to measures announced for Heroes' Day weekend.

"What we do now will determine what we will be able to do in the Christmas period. If it gets out of hand now we would have no choice but to have tighter measures during Christmas," Holness said. "All Jamaicans should now be thinking that we should all be complying with the protocols, with the rules so that we may be able to have some merriment ... It is Christmas so we should be very careful now so that we may be able to enjoy even a few days at Christmas."

Jamaica began experiencing a spike in COVID-19 cases after the Government failed to tighten curfew measures over the 'Emancipendence' period.

Holness said that the Government has taken the tough measures going into the holidays because of the spike that is currently taking place.

"We have considered where we are with the progression of the virus in the country and we have taken a decision to discourage the parties and gatherings which are normal during the Heroes Weekend," Holness said.