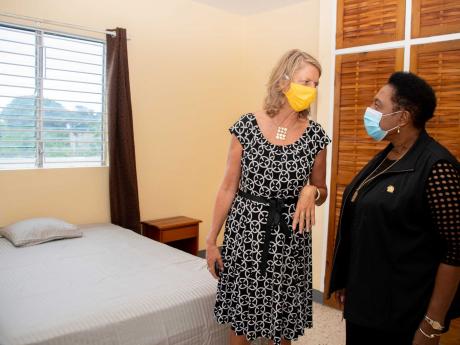 The Minister of Culture, Gender, Entertainment and Sport, Olivia Grange (right) shares a moment with the High Commissioner of Canada, Her Excellency Laurie Peters, during a tour of the first state-run shelter for victims of domestic abuse on 15 October 2020.

“The place is nice and clean and ready, except for one and two things,” said Minister of Culture, Gender Entertainment and Sport, Olivia Grange, on Thursday, after she examined the facility that will serve as the first state-run shelter for victims of domestic abuse.

The establishment of national shelters for women who need help to leave violent relationships has been one of the priority programmes of the Ministry.

The Ministry purchased the property in 2018 and has undertaken significant work to transform it into a facility to house women who are victims of gender-based violence and their children.

“We’re fine-tuning some protocols in terms of the operation — just to cross the T’s and dot the I’s. In the meantime, we’re ready; we can take in — I would call them clients — and take care of a family. We actually have most of the rooms ready. There are just two unfurnished rooms,” Grange said.

The Ministry has also purchased two other properties which it will transform into shelters for victims of abuse.

Minister Grange said the establishment of the shelters could not have been achieved without the assistance of our international partners.

“The former EU Ambassador [Her Excellency Malgorzata Wasilewska] and the Canadian High Commissioner [Her Excellency Laurie Peters] have been very much involved in our efforts to get these shelters. The EU Ambassador has left, but the Canadian High Commissioner [who] will be leaving soon, wanted an opportunity to see where we were in this effort,” said the Minister.

“I am delighted to be here with Minister Grange today at this the first of several nationally funded women’s shelters. We all recognise, Canada in particular, the importance of having safe spaces for women and their families. We have seen that the COVID-19 pandemic has put additional pressures on families as they are in isolation and none too soon this is a timely undertaking and I’m heartened to see that it has the space and the capacity to be able to welcome women and their families,” she said.

Minister Grange said she was happy with the development, adding that the facility needed a few items to ensure the comfort of clients.

“So we can do with television sets and bunk beds and desks, toys for the kids and so on. We have studio facilities and we have one bedroom facilities. The rooms are very spacious so we can in fact accommodate a family in an apartment,” said Minister Grange.

The Minister has urged women in abusive situations to call for help.