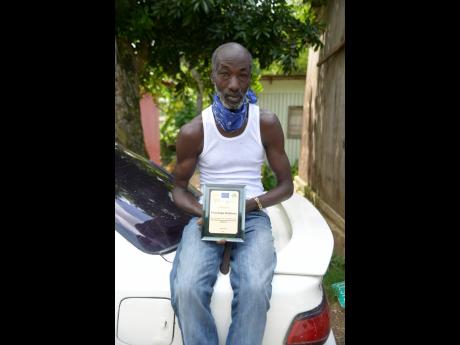 Eight years ago, Franklyn Williams and his friend Ras rescued a pregnant woman and her husband from the roaring Rio Cobre, near Flat Bridge.

The couple was travelling to Spanish Town Hospital after the woman's water broke, but found their vehicle drifting in the river as they travelled through the Bog Walk gorge in St Catherine.

They had nothing to hold on to or to steer them back to land, until Williams and Ras saved the day.

"Two a we affi stretch out we two hand and hold each other, then we put her up on we hands. And we juggle against the banking and bring her right up to which part the ambulance deh," Williams told THE WEEKEND STAR. "We go and see the ambulance, but nobody neva did a mek no move, so same time we dive off." He isn't sure who called the ambulance but recalled it was music to his ears when he realised the woman had safely delivered the baby shortly after they rescued her.

"By the time we put her in the ambulance, she have the baby. After that, we never see them again," he said. Williams says the water was heavy and he and Ras had to struggle through.

"Is around a hour or so it take we fi bring her up, because the water heavy and yuh caah come hard. And all her man all deh deh a hold on pon one a we too," he recalled. "Me know seh we coulda mek it ... if we couldn't make it, we wouldn't go down there."

All truck and car wash

He said that he and other volunteer divers in the Flat Bridge area are used to getting people to safety.

"Every time water block up and thing, we go down there and help out who we can help out. Several times me go round there and all truck and car wash weh and we affi bring the people dem come back pon land. Anybody who wash away, we never reach those times," he said.

In April 2019, he was given a plaque by the Natural Disaster Risk Management programme and Water Resources Authority for his continued contributions to the Rio Cobre Flood Early Warning System.

"I feel real nice. Although we don't get any money and thing, we have something can show seh we help out the people dem. Everybody feel happy 'bout it, my sons, family and neighbours. Me cherish it," he said. Meanwhile, Spanish Town Mayor Norman Scott told THE WEEKEND STAR that the bravery of Williams and other volunteers over the years is remarkable.

"There have always been individuals in and around the Flat Bridge area, showing their gratitude to the persons. As the chairman of the St Catherine Municipal Corporation, I just want to really commend the individuals," he said.