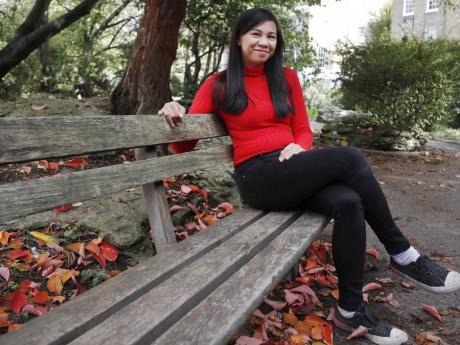 Danica Marcos, sits in a park in London, Friday, Oct. 16, 202. Danica Marcos a volunteer as U.K. researchers are preparing to begin a controversial experiment that will infect healthy volunteers with the new coronavirus to study the disease in hopes of speeding up development of a vaccine. (AP Photo/Frank Augstein)

LONDON (AP) — U.K. researchers are preparing to infect healthy young volunteers with the virus that causes COVID-19, becoming the first to announce plans to use the controversial technique to study the disease and potentially speed up development of a vaccine that could help end the pandemic.

This type of research, known as a human challenge study, is used infrequently because some consider the risk involved in infecting otherwise healthy individuals to be unethical. But researchers racing to combat COVID-19 say that risk is warranted because such studies have the potential to quickly identify the most effective vaccines and help control a disease that has killed more than 1.1 million people worldwide.

“However, such studies are enormously informative about a disease, even one so well studied as COVID-19.”

Human challenge studies have been previously used to develop vaccines for diseases including typhoid, cholera and malaria.

Imperial College London said Tuesday that the study, involving volunteers aged 18 to 30, would be conducted in partnership with the government’s Department for Business, Energy and Industrial Strategy, the Royal Free London NHS Foundation Trust and hVIVO, a company that has experience conducting challenge studies.

The government plans to invest 33.6 million pounds in the research.

Before any research begins, the study will be considered by regulators and the NHS Health Research Authority.

Governments around the world are funding efforts to develop a vaccine in hopes of ending the pandemic that has pummelled the international economy, shutting businesses and putting millions of people out of work.

Forty-six potential vaccines are already in human testing, with 11 of them in late-stage trials — several expected to report results later this year or in early 2021.