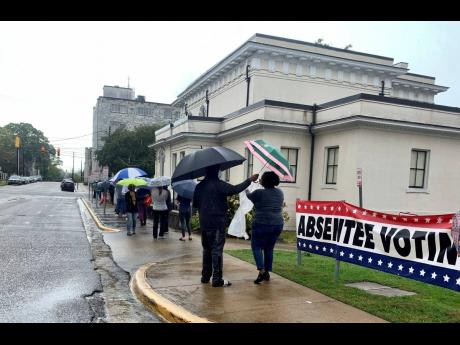 People wait in the rain to vote in Montgomery, Alabama, last Saturday. Alabama Secretary of State John Merrill said a record number of absentee ballots have already been cast this year in the election. Some counties allowed Saturday voting for the first time.

A Tropical Storm watch has been issued for the Cuban province of Pinar del Rio as Tropical Storm Zeta has formed near the Spanish-speaking island, becoming the earliest named 27th Atlantic storm recorded.

According to the Miami-based National Hurricane Centre, residents on Mexico's Yucatan Peninsula should also monitor the progress of the storm, which is expected to gradually strengthen over the next 72 hours.

The storm had top sustained winds of 75 mph (120 kph) with higher gusts, making it a Category 1 hurricane.

The minister with responsibility for culture in the Office of the Prime Minister, John King, says that the statue of Lord Nelson will be removed from its location in National Heroes Square on November 16, that is observed as the International Day of Tolerance.

King, whose office is leading the project, described the decision as "a step towards the healing of the nation and to remind us all that tolerance is a universal human right".

"As we amend the Constitution to have a Barbadian head of state, and as a symbol of the maturity of our democracy, it is imperative that we re-examine notable elements of our colonial past," King said.

He added that the statue, that is more than 200 years old, is to be removed and transported to a temporary storage site under the guidance of experts, before being returned to public display on the compound of the Barbados Museum and Historical Society at The Garrison, St Michael.

The main opposition coalition, A Partnership for National Unity + Alliance For Change (APNU +AFC), has called for the resignation of Tourism Minister Oneidge Walrond.

The call was made after Walrond last Saturday admitted that she was a dual citizen when she was recently sworn in as minister of government and as a member of parliament.

In a statement, the tourism minister said that she has since denounced her US citizenship.

"I wrote to the US Consular Office on August 18, renouncing my citizenship to the United States of America with immediate effect. I was thereof informed of the administrative procedure I must comply with to obtain a Certificate of Loss of Nationality of the United States. I complied with that process by August 27. I have since received the Certificate of Loss of Nationality. I took the oath to the National Assembly on September 1. That was after I renounced my citizenship of the United States of America," she said.

However, in response, the APNU+AFC said "a person's dual citizenship comes to an end at the time of the dated renunciation certificate, not at the time when one decides to embark on the process".

"There is no such thing as the immediate renouncing of one's citizenship. It is a process and it is only formal and final after the process is completed," the opposition said.

Caribbean American Democratic New York City Public Advocate Jumaane Williams has called on the city's Board of Elections to establish more polling sites to accommodate the flood of voters, ahead of the November 3 election.

"Across the city, thousands of people waited hours in line to cast their ballot on the first day of early voting. While long lines are a sign of civic pride and determination, they are also a sign that we may need to open additional sites in the future to meet the demand of the electorate," Williams, the son of Grenadian immigrants, told the Caribbean Media Corporation (CMC) last Saturday.

Williams encouraged New Yorkers to take advantage of this opportunity to cast their ballots at the best time for them, "while also reducing the expected strain on the system November 3rd".