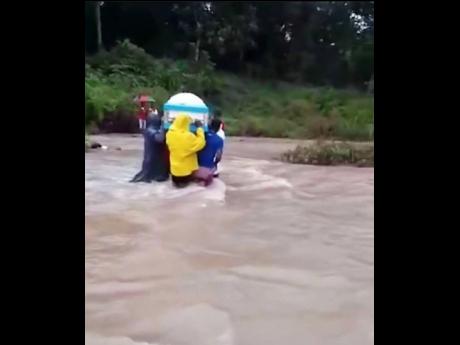 The McDermott brothers and friends carry the casket through floodwaters. 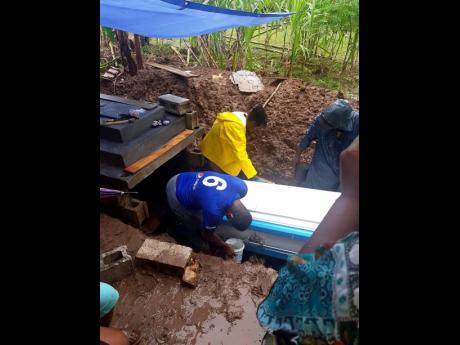 Marcus (in the yellow raincoat) and others bail water from the grave before laying his father to rest. 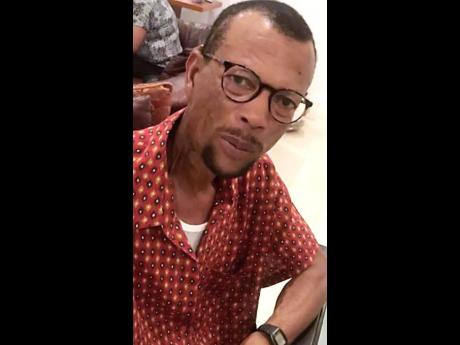 Rain or shine, Marcus and his younger brother Albert McDermott Jr decided that they were going to lay their father, 63-year-old Albert McDermott Sr, to rest in Ballard River, in Clarendon last Saturday morning.

Aided by friends, the men journeyed with the casket across a flooded road in waist deep water, a river, and up a hill to take their father to the family plot.

The elder McDermott, who was a farmer, took ill last September and was diagnosed with stage four colon cancer. He passed away shortly after.

"The rain came without any hesitance. Persons were saying 'put it off until Sunday', but that would've been a big regret because the rain came harder on Sunday. So we stick through and we think we did a very good job," Marcus told THE STAR. He said they had to honour their father because of the life he gave them.

"He is a very humble, decent, nice man and everyone will say that. His shoes will be very hard to fill. It's five of us and it's one mother and father. We lost our mother 10 years ago. So we grew up in Clarendon with him. Our father instilled some good values in us, the real standard that we should live by. We only separated as adults, but our father was never out of our lives," he said. What would normally be a short walk, took them more than 30 minutes amid the intermittent rainfall.

"I was one of the persons carrying the casket and I wasn't fearful. My smaller brother (Albert) was there too. Several other persons were helping and we had a distance to go, so each time we had to change and take turns. As someone hand feel like they can't hold it anymore, someone else fit in," said Marcus. But Albert Jr said he was overcome by panic when he saw the rain.

And when asked how his father would've reacted, he said: "I know he's very proud right now. He was a very determined man just like us. We wanted to lay him to rest."

Marcus said when they got to the grave site, they had to bail water from the hole before burying their father.

"But we did that in no time and put him in and seal it up. It wasn't just family members. A lot of persons throw themselves into the water. My father was a people person ... no matter what the weather, people said they had to come," he said.