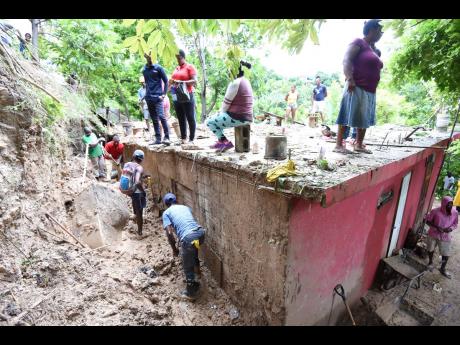 Shooters Hill residents try to find Sanique Leachman after she was buried under mud and debris after a landslide. 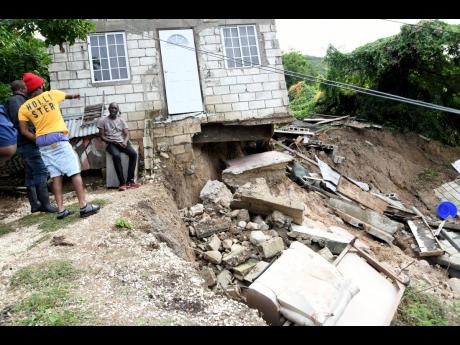 A section of a house that collapsed during a landslide in Shooters Hill during heavy rains on Sunday. 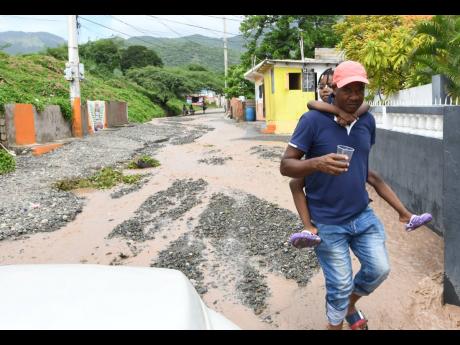 Kelly Forbes carry this granddaughter on his back through his community of Weise Road, Bull Bay, St Andrew, after the Chalky River overflow its banks and damaged home duringheavy rains on Sunday.
1
2
3

Prime Minister Andrew Holness said that the Government will move to prevent people from living in places vulnerable to natural disasters.

Like leaders before him, Holness said that the practice of persons living in danger zone areas such as gully banks cannot be allowed to continue as it is putting lives at risk and affecting the country's productivity.

"We have to now put in place policies that will seek to ensure that we get Jamaicans to choose to live where it is environmentally safe," Holness said, admitting that the change will not happen overnight.

Former Prime Minister P.J. Patterson, in 2005, promised no-build zone legislation, but it was not until 2018, when a Building Act was passed, that the law was enacted that seeks to discourage the construction of buildings in unsafe areas. However, Holness said that the Government needs to develop a clear policy on urbanisation and planned communities, which he said would help answer the question of where people should live.

"We shouldn't wait until there is a disaster and then to come and say, 'well, they settled there irregularly, and it is their fault'. We know that it is going to happen. We know that there is going to come a weather event -- and we have seen it. The landslide that happened in East Rural St Andrew, where unfortunately two persons perished, you can see that it is a difficult place to build," Holness said.

In that incident, a father and a daughter, Romeo and Sanique Leachman, were killed when a landslide crushed their home in Shooters Hill during the rainfall on Saturday.

Holness offered sympathies to the family when he spoke in Parliament yesterday, even as he stressed that Government will have to use policies to prevent people from living on hillsides and on gully banks.

"We know we are going to have landslides. Houses built on marginal lands such as on gully banks, we know that when there is significant rain, which we know will come because of the weather events that we are now having ... that the houses are going to be flooded out. At some point, as a society, we must come to the understanding that you cannot choose to go and live anywhere you feel," Holness said.

"There are some areas, regardless of the political implications, if we could only reach across the aisle and shake hands on it and come to an understanding on it, that there are some communities that shouldn't be where they are," he added.