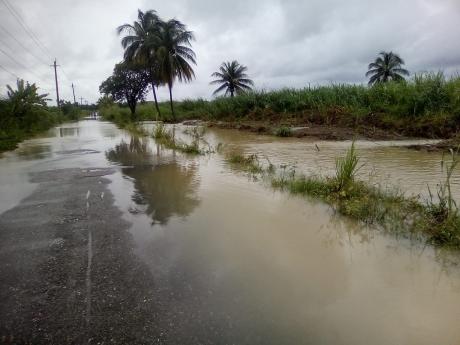 Caution: Flooding now being experienced in sections of Portland and St. Thomas, photo via The National Works Agency on Twitter.

The National Works Agency (NWA) is reporting that consistent rains over the last 24 hours have left roads in St. Thomas impassable, while others in neighboring parishes of St. Mary, and Portland have been reduced to single lane due to flooding and landslides.

The NWA says in St. Thomas, the corridors from Morant Bay to Port Morant, Pleasant Hill to Hectors River, Bath to Hordley and Hordley to Haining are now impassable due to flooding.

The Folly main road in Portland is also flooded in sections, while a landslide is now impacting the road from Gayle to Labrinth in St. Mary. This landslide is located close to an area referred to as Hill sixty.

Manager, Communication and Customer Services at the NWA, Stephen Shaw, says work crews have been mobilised to deal with those issues that can be addressed, even as the rains continue.

These include the reopening of critical drains and the removal of landslides.

Mr. Shaw says where flooding is concerned, some of the affected areas are low-lying and lend themselves to being impassable whenever nearby rivers are in spate.

He has urged persons not to attempt to use flooded roads, as they run the risk of suffering personal and property damage.