#USElection| Long lines, enthusiasm but no major problems as US votes 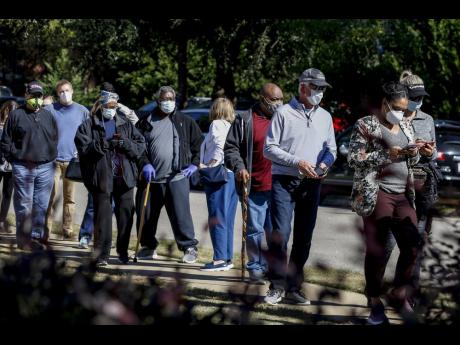 Republican nominee for the Alabama Senate, Tommy Tuberville (third from right), stands in a long line waiting to cast his vote on Tuesday, Nov. 3, 2020, in Auburn, Ala. (AP Photo/Butch Dill)

(AP) - Voters marked the end of a fraught U.S. election season at the polls Tuesday, casting the last of what will likely be a record number of ballots in the midst of a global pandemic that upended long-established election procedures, prompted an unprecedented surge in mail ballots, and triggered hundreds of lawsuits.

No major problems were reported, and fears of large-scale voter intimidation or harassment had not materialised by midday.

Officials have already warned that counting ballots could take days due to an avalanche of mail votes that take more time to process and could result in another round of court battles.

President Donald Trump has already threatened legal action to prevent the counting of ballots that arrive after Election Day, which some states allow.

Meanwhile, a federal judge ordered postal workers in some major cities to sweep processing facilities for any remaining ballots before the end of the day.

Minor problems occur every election, and Tuesday was no different, there were long lines and sporadic reports of polling places opening late, along with equipment issues in counties in Ohio, Texas and Georgia.

This was all expected given voter enthusiasm, the decentralised nature of U.S. elections and last-minute voting changes brought on by the pandemic.

There were also reports, as there are every election, of efforts to discourage people from voting that surfaced in robocalls in Michigan and Iowa. The FBI was investigating.

At least 101.9 million people had already voted before Election Day, about 73 percent of the nearly 139 million who cast ballots in 2016, according to data collected by The Associated Press.

Given that a few states, including Texas, had already exceeded their total 2016 vote count, experts were predicting record turnout this year.

Those yet to vote headed to polling places despite another spike in COVID-19 cases that has hit much of the country.

Among them were voters who may have wanted to vote by mail but waited too long to request a ballot or those who didn’t receive their ballots in time.

The order, which includes centers in central Pennsylvania, Philadelphia, Detroit, Atlanta, south Florida and parts of Wisconsin, followed concerns the agency wouldn’t be able to deliver ballots on time.

Federal authorities were monitoring voting and any threats to the election from an operations center just outside Washington D.C.

Officials there said no major problems had been detected.