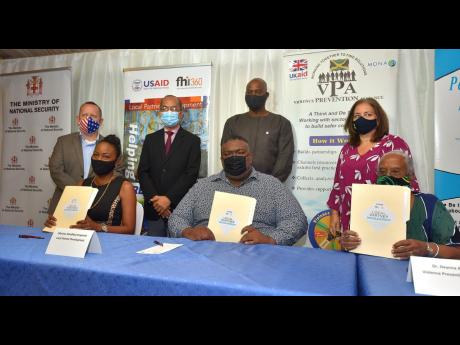 Approximately 160 youngsters from Trench Town and Whitfield Town, St. Andrew, will benefit from interventions aimed at steering them away from crime and violence under the Local Partner Development (LPD) Programme.

The grant signing ceremony and launch of the LPD took place on Thursday (November 19), at the Terra Nova All-Suite Hotel in St. Andrew.

Minister of National Security, Dr. Horace Chang, in hailing the initiative, said that effective social intervention strategies and programmes are vital for safeguarding lives, transforming communities and reducing the number of young men turning to gangs.

He noted that the Government has been steering young people into productive training programmes such as the Jamaica National Service Corps, which exposes them to military skills and has a strong technical component.

Dr. Chang reiterated the Government’s commitment to equipping the police with the requisite tools to disrupt gang activities in communities and reduce the country’s homicide rate.

He commended the US Government for the support, noting that the country has been a long-standing partner in security and other areas.

Chargé d'Affaires, US Embassy, John McIntyre, said the partnership “is an indication of the priority placed on the young people in this country and the confidence we have in their abilities to champion and make change for the better”.

He noted that the three organisations, which will provide the support services, work in the communities and know the challenges that the young people face.

“Success requires their involvement and we welcome the opportunity to collaborate with them and, just as importantly, the Ministry of National Security,” he said.

Mr. McIntyre informed that the programme will be expanded to other communities and police divisions with similar profiles, including those that have some of the country’s highest homicide rates.

He said that since 2009, the US Government, through the Caribbean Basin Security initiative, has partnered with Jamaica and other CARICOM Governments to enhance citizen security.

“Between 2010 and 2019, the USAID mission in Jamaica has programmed over US$75 million in helping Jamaica to improve citizen security. We remain committed today, as we were 10 years ago, to working closely with our partners to increase safety and security in Jamaica,” Mr. McIntyre noted.

The LPD is a six-year activity that is funded by USAID through the Caribbean Basin Security Initiative and implemented by international non-profit organisation FHI360, which works to improve the health and well-being of people in the United States and around the world.