Man allegedly kills self after shooting two others 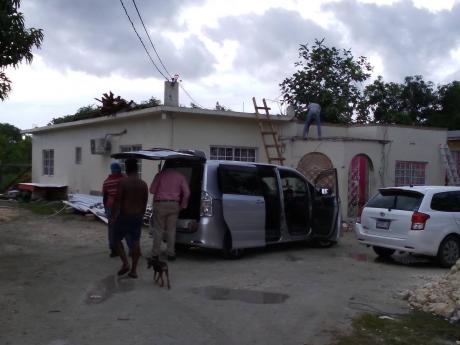 Men gather in the yard close to the home where Daniel Porter allegedly shot his girlfriend and best friend before shooting himself early Thursday morning.

The family of Daniel Porter, 28, a promoter of Chantilly Gardens in Westmoreland, is calling for a full investigation after he allegedly shot and injured his girlfriend and best friend, before killing himself.

The injured have since been treated at hospital. Reports by the Savanna-la-Mar police are that, shortly after 3 a.m. Thursday, Porter had an argument with his girlfriend at the home of his neighbour and best friend.

During the argument, Porter brandished a firearm and shot his girlfriend. His friend rushed to investigate and was also shot. Porter then ran into a bathroom and shot himself.

But Porter's relatives believe he was murdered. His mother, Andrea Grey, told THE WEEKEND STAR that her son does not own a firearm, and she is demanding a full investigation.

"Daniel went over to the yard about 9:30 p.m., and told me that he and his friends were going to bleach whole night. But after watching a movie on my phone, I fell asleep and woke back up about 3 a.m. with a headache," she said. "I went to the kitchen to get a piece of garlic when I heard explosions, but I thought they were knocking pieces of board together. It was after I heard commotions outside that I got concerned and called Daniel's phone, but he did not answer."

Grey said she called the girlfriend of her son's friend, who informed her that Porter had shot the two persons and then killed himself. Grey said she ran next door, but both gunshot victims had been rushed to hospital while her son was still in the bathroom.

Porter's father, Donald, said that he is concerned that his son is right-handed, but allegedly shot himself from the left side of his head.

When THE WEEKEND STAR visited the crime scene, several men alleged that Porter's girlfriend had recently told him that she wanted to break off the relationship and that he did not take the news well.

Commanding officer for the Westmoreland Police Division, Superintendent Robert Gordon, told THE WEEKEND STAR that persons need to resolve their differences without violence, and need to find mediators to assist them.

"When a relationship is not working out, walk away. We don't need to use violence to solve our problems. We also need to display greater level of tolerance, not only with our partners, but also with our neighbours and other persons who we might come in contact with," Gordon said.