ONE-MINUTE READS ... News from across the nation 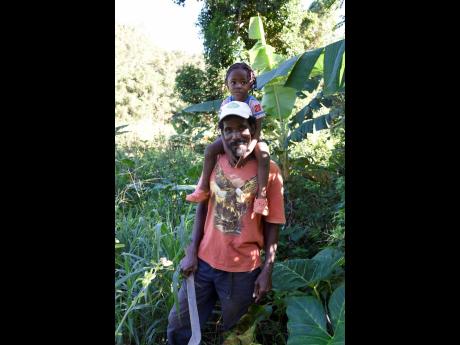 Denzel Lawrence was seen on his farm in Yellant, Gibraltar, St Ann, with his son, Marcodean Lawrence, last Friday. 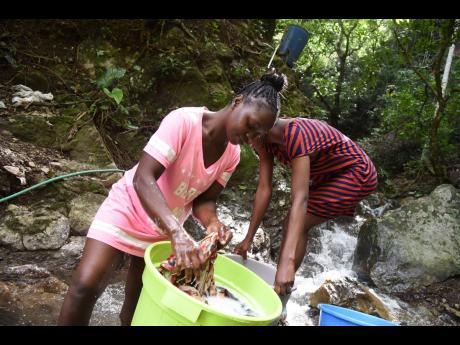 Alecia Sterling, 28, and her 22-year-old sister Shara Sterling do their laundry at a tributary that leads to the Hope River last Wednesday. The siblings walk a mile to get to the tributary because of inconsistent water supply in the greater Mavis Bank area.
1
2

Youths urged not to race into parenthood

Minister of State in the Ministry of Culture, Gender, Entertainment and Sport, Alando Terrelonge, said that too much pressure is being placed on young people to engage in sexual activities at an early age and to become parents.

"At some point, we have to realise that there is something wrong with that aspect of the culture that seeks to call our young women mules and our young men gelding .... that needs to change," Terrelonge said.

The minister has urged young people not to surrender to social pressure to become parents early, or to have children by a certain age, to fit in with society's expectations.

Instead, he is encouraging them to empower themselves and to ensure that they wait until they are mentally, financially and emotionally ready to become a parent.

"We need our young men to understand that having a child at 18, 19 or 21 does not make you a man, what makes you a man is focusing on your education and putting yourself in a position where you can take care of a family and that is what makes you a woman as well," Terrelonge said.

Prime Minister Andrew Holness on Friday broke ground for the new Mount Salem Police Station in St James. The construction of the facility, which is being spearheaded by the Jamaica Social Investment Fund (JSIF) and funded by the European Union (EU), is being done at cost of $45 million.

"When a police officer comes to work and the conditions are so poor, what do you expect of them when they go out to deal with the citizens? We are making an investment in improving the space in which the police and the citizens interface," the prime minister said.

Holness said that 86 of the 105 police stations slated for rehabilitation have been completed, as well as the construction of 20 new police stations across the island so far.

"There are some police stations in Jamaica which are in really bad condition and we [the Government] spoke about one police station in Westmoreland that we really need to pay attention to. It will take some time, but we are committed to transforming the work place of the police," Holness said.

"To every problem there is a solution. I challenge and encourage all to help to solve those problems," Charles said last week at a virtual Youth Environmental Advocacy Programme (YEAP), under the theme 'Build Back Better: Ecological Resilience for Disaster Risk Reduction.'

Addressing the forum, Jacqueline Spence-Hemmings, head of the Climate Branch, MET Office, said data from the Intergovernmental Panel on Climate Change (IPCC) indicate that Jamaica and other countries are experiencing the effects of climate change. She said that the data is projecting an increase in the number of hot days in most land regions, with the highest increase in the tropics.

Pan American Health Organisation (PAHO) member countries are being encouraged to adhere to guidance from their national health authorities regarding Christmas celebrations, in light of the COVID-19 pandemic.

PAHO's Assistant Director, Dr Jarbas Barbosa, says decisions relating to public and private engagements should be based on the most up-to-date COVID-19 information, particularly data indicating whether the virus is spreading and if countries' health systems have adequate capacity to deal with cases.

"Regardless of location, religious services should look different this year. They should be held outside, whenever possible, only meeting inside when it's not," said.