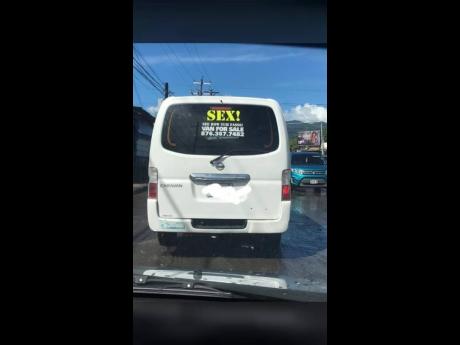 Graphic designer Nicholas Watt has always had a way with words, but had no idea how much attention he would have captured when he decided to post a particular ad on the back of a minivan that he was selling. Displayed in large, bold letters is the word 'SEX!', followed by 'See How Yuh Fasss' -- 'Van for Sale'.

"People always stopped me and tell mi that it is a good idea to sell stuff and how the sticker got them off guard. The sticker doesn't say sex for sale, but persons say that is what they read at first, and when they read again they see the real message," Watt told THE WEEKEND STAR.

Watt said he sold the vehicle two weeks after he posted the advertisement. He also claims to have received numerous calls from persons who were interested in getting a similar sticker.

"A lot of marketing and advertising come along with what we see, and if you can capture somebody viewpoint with a simple word, then you are on the right path. The word sex seems to be on everybody's mind and I just thought about it and said that this was what I was going to do, and it worked," Watt said.