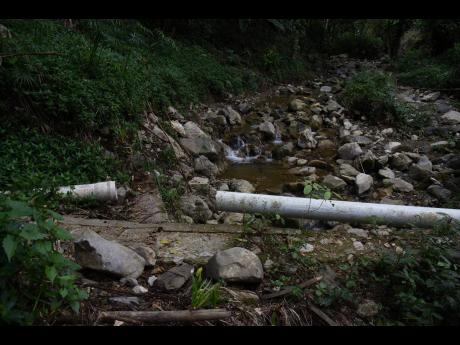 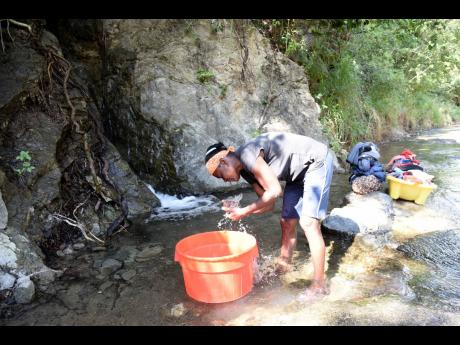 About 7 a.m. on Tuesday, Bebis Buckley travelled two miles from her home in Ramble, St Thomas, to a small waterfall two miles away to wash clothes and catch water; at noon, she was barely finished.

During heavy rains associated with Tropical Storm Eta in November, sections of the Yallahs pipeline were washed away, leaving residents without piped water; that was about four weeks ago. Buckley told THE STAR that residents have to depend on rivers.

"This is the only source we have to get water to drink, wash, cook and everything. Everybody come here. All the nurses, soldiers, doctors and police come here. We have been suffering with this water situation," she said. Buckley says the water flow is decreasing, and if it dries up, residents will be left with no other water supply.

"I don't know the next step after this gone. We are going to have to turn to the riverside which is below here. But we don't even have place to walk to go down there," she said. "It's very difficult. If you don't have a ride like I do, then there is a bigger problem. You have to get a taxi and pay to carry your stuff to go back home or bring them on your head."

With the spring water being used for consumption, Buckley says residents also have health concerns.

"It might not be clean, and we have our young children drinking as well. I have seven children. And honestly, it's not all the time we can boil water. We just drink it just like that and hope that it is safe enough for us," she said. Instead of washing and showering at the spring, 60-year-old Irene Morgan uses a van to transport water to her home.

"Since the rain, I have to get water from the river and fill my drum. For drinking purpose, I have to fill white bottles and store them separate. I catch it in Ramble. Otherwise, I would have to go down to the river here and that is harder," she said.

And it's usually a day's work if she wants to fill her 400-gallon water tank.

"If I want to full up the drum, I have to make about five trips. Sometimes I would have to start from the night before. I pay for the drive because I cannot carry the load all the way up here. I have a gentleman that drive a van who takes the water to me, and then I have a little young fellow who bail it from the van for me and set it up to fill the drum," she said.