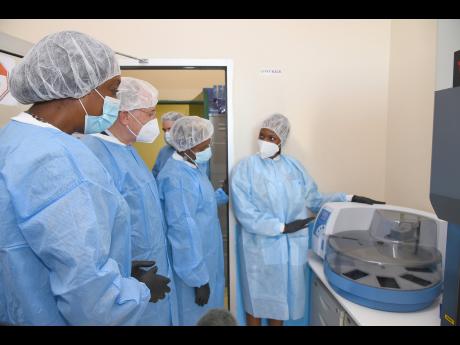 The Spanish-Jamaican Foundation, has officially handed over a purification system to the National Public Health Laboratory, which will improve efficiency in the testing of samples for COVID-19.

The Kingfisher Flex system, valued at US$94,039 allows for rapid and efficient processing of samples.

Minister of State in the Ministry of Health and Wellness, Juliet Cuthbert Flynn, in her remarks at the presentation ceremony held at the lab’s downtown Kingston location on Tuesday, expressed gratitude for the donation, noting that the system is “definitely needed”.

She hailed the continued support from the organisation, which included the donation of 210,750 disposable ear loop masks (4,215 packs of 50).

“The entire world is going through a crisis right now, but what I have seen and what we have all seen, is how the world has stepped up to the plate, to actually help each other,” she said.

“All the donations, the masks, the swabs, and especially this machine... will definitely help with the PCR testing and getting the tests more readily to the hospitals,” she added.

Director, National Laboratory Services, Dr. Michelle Hamilton, explained that the purification system significantly reduces the time for the processing of samples from five hours to 25 minutes.

“In the five hours, we could have done 50 samples, but with the machine, we are able to do almost 90 samples in 25 minutes. So, you see that we are saving time as well as doing more samples,” she noted.

Ambassador of Spain to Jamaica and President of the Spanish-Jamaican Foundation, His Excellency, Josep Bosch Bessa said the provision of the system is in keeping with the long-standing relationship between Spain and Jamaica.

He said that the Foundation readily sought and procured the equipment, when the need was expressed by the Ministry of Health.

“The Foundation got a very good product. This purification system is already in operation, so it’s an improvement for the lab,” he noted.

Ambassador Bosch Bessa said that the Spanish companies operating in Jamaica are committed to supporting the country.

“They came and they invest mostly in the hospitality industry, so Jamaica has benefited… The Spanish companies are here to share and join efforts when there’s a need,” he said.

The Spanish-Jamaican Foundation includes members from various Spanish-owned hotels and companies. It aims to strengthen partnerships between Spain and Jamaica through educational, environmental, cultural and community-based initiatives.