Over 2000 pounds of animal carcasses seized in Westmoreland, one man in custody 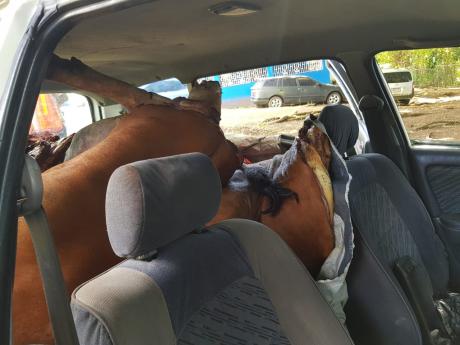 The animal carcasses were found in a Caldina motorcar on the Bluefields main road, Westmoreland.

One man has been taken into custody in connection with the seizure of more than 2000 pounds of carcasses by police in Bluefields,Westmoreland during an operation on Tuesday, December 15.

Police reports are that about 5:45 a.m., lawmen intercepted a Caldina motorcar on the Bluefields main road; it was searched and the carcasses discovered.

The driver could not account for the carcasses and was subsequently arrested.

The police say they are now seeking another suspect allegedly involved.

With the festive season seeing an increase in cases of praedial larceny, the police have advised members of the public to only purchase meat from reputable sources.

Farmers have also been urged to be vigilant, and report theft of livestock and crops to their nearest police station.