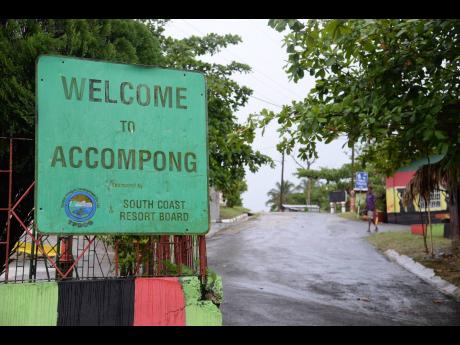 This sign tells you that you are in Accompong Town, St.Elizabeth.

The event reportedly went unnoticed by the police and the maroons partied uninterruptedly.

Deputy Superintendent of Police Nardia Simms, commanding officer for St Elizabeth, told THE STAR she would've personally locked off the party had it been reported to her.

"We were not aware of it and we were not made aware of it by anyone. I did not get any reports of that, but if I did hear about it I would've gone to shut it off," she said.

"These parties are just like some pop-up parties. They even stop advertising. That's what we notice. They just do it up there. We continue to do all that we can to ensure that people are cognizant and adhere to the Disaster Risk Management Act because it's there to protect all of us."

The Government has banned gatherings that involve more than 15 persons, except at church services and weddings, and has imposed prohibition on parties and other entertainment events. The measures, public health officials argue, are crucial to containing the spread of COVID-19, which has claimed 295 lives in Jamaica as at Saturday. More than 12,720 persons in the country have tested positive for the dangerous novel coronavirus, which causes the COVID-19 disease.

Jamaica, like many countries around the world, has been experiencing an uptick in COVID-19 cases, and authorities are bracing for a holiday-fuelled spike.

Contacted yesterday, Cornel Wright, who identifies himself as an overseer in Accompong, told THE STAR that maroons are alert to the dangers of COVID-19 being at events such as parties, but decided to stage the event nonetheless.

"A our rights, enuh. We sure a who we know inna our community because dem deh round we. We nuh wah seh we a breach anything or a try go against the Government, because by right, all parties should've been cut. But Jamaica a Jamaica and Maroon and Maroon. We just a party between we one another," he stated.

Accompong, like other maroon villages in Jamaica, claims sovereignty over its territory.

Wright, noting that the community has been thirsty for entertainment since the pandemic, says he was not surprised the the large turnout for Saturday's event.

"Roughly 200 people were there, and most, if not all of them, were maroons. It's a party weh keep every year where people just eat and drink and party. I wasn't surprised by the crowd because me know seh maroons always have them bag a people."