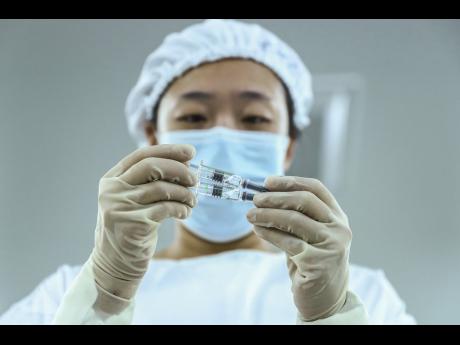 BEIJING (AP) — China authorised its first homegrown COVID-19 vaccine for general use Thursday, adding another shot that could see wide use in poorer countries as the virus surges back around the globe.

The Sinopharm vaccine had already been given to groups such as health care professionals and essential workers under emergency-use guidelines as part of China’s program to inoculate 50 million people before the Lunar New Year holiday in February.

But the go-ahead should allow it to be supplied more broadly at home and moves Beijing closer to being able to ship it abroad.

It comes one day after British regulators authorized AstraZeneca’s inexpensive and easy-to-handle vaccine.

Both shots have been closely watched by developing countries, many of which have been unable to secure the Pfizer and Moderna doses being snapped up by rich nations.

Pakistan’s science minister said Thursday that his government will buy 1.2 million doses of a Sinopharm shot, two days after its death toll topped 10,000.

The greenlight came a day after the state-owned company announced that preliminary data from last-stage trials had shown it to be 79.3% effective.

That announcement did not detail the size of the control group, how many people were vaccinated and at what point the efficacy rate was reached after injection, and experts have cautioned that trial data needs to be shared.

Officials have said the vaccine standards were developed in “close cooperation” with the World Health Organization.

Securing WHO’s so-called pre-qualification could go some way toward assuring the rest of the world about the quality of Chinese vaccines, which already face a reputation problem back home.

It would also open the path for the shots to be distributed in the global vaccine consortium, COVAX, and potentially in countries that don’t have their own regulatory agencies.

China is eager to ship its vaccines globally, driven by a desire to repair the damage to its image caused by the pandemic that started a year ago in the central city of Wuhan.

Technically, China granted conditional approval for the vaccine, meaning that research is still ongoing, and the company will be required to submit follow-up data as well as reports of any adverse effects after the vaccine is sold on the market, Chen Shifei, the deputy commissioner of the National Medical Products Administration, told a news conference.

Final proof of its effectiveness will depend on publication of more data.