UK in ‘eye of the storm’ amid surging new coronavirus cases 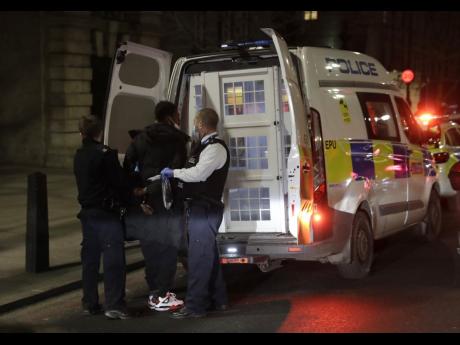 Police make an arrest as they move people who have gathered on the embankment opposite London Eye ferris wheel by the River Thames in London, Thursday, Dec. 31, 2020. The London Eye is one of the traditional sites for New Year's Eve firework display, but it has been cancelled due to the ongoing coronavirus pandemic and the restrictions in place to try and stop its spread. (AP Photo/Matt Dunham)

Concerns are mounting about the ability of the already stretched National Health Service to cope with the anticipated increase in people seeking treatment for COVID-19 infections over the coming weeks that could be further fueled by holiday gatherings over Christmas and New Year’s.

On Friday, the U.K. recorded another 53,285 new infections, down slightly from the previous day’s record high of 55,892.

Although comparisons with the outset of the pandemic are difficult given that testing was limited in the spring, the U.K. has recorded its four highest daily new infection numbers over the past four days, all above 50,000 and around double the daily number of a few weeks ago.

The spike in new cases is said to be due to a new, more contagious variant of the virus first identified around London and the southeast of England.

Given the time lags between new cases, hospitalisations and COVID-19 deaths, there are huge concerns about the path of the pandemic over the coming month or two.

Britain already has Europe’s second-highest virus death toll at 74,125 after another 613 deaths were recorded Friday.

As a result of the spike in new infections, which has prompted even tighter lockdown restrictions, British authorities have changed their strategy for rolling out coronavirus vaccines, choosing to get more people an initial jab as soon as possible, and delaying the second shot for up to three months.

Currently, two vaccines have been approved for use in the U.K. and both require two doses per person.

Around 1 million people have received the first dose of the vaccine developed by American pharmaceutical firm Pfizer and German biotechnology company BioNTech, with a small minority also getting the second dose as planned after 21 days.

Earlier this week, Britain also approved a vaccine developed by the University of Oxford and British pharmaceutical firm AstraZeneca that is substantially cheaper and easier to use.