Drama grips MoBay as man threatens to jump to his death 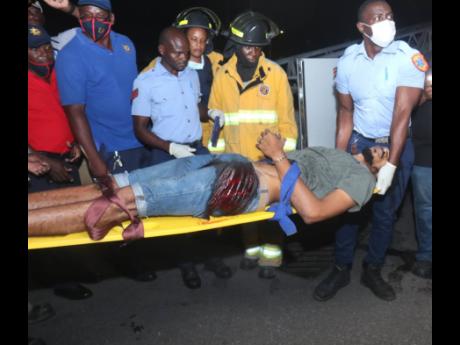 Kemar Archer is carried by fire and medical personnel to the ambulance.

There is still plenty of speculation as to what caused Kemar Archer to climb atop the Scotiabank outlet in Fairview, Montego Bay, on Sunday.

Archer, who defied the assistance of anyone who came near and threatened to jump, was eventually shot in the leg by a soldier and taken down.

At approximately 6 p.m., it was reported that Archer, who is believed to be of unsound mind, climbed atop the building and soon cops and firefighters made efforts to get him down. One cop said that Archer was armed and hostile when they tried to get close, and was armed with two pieces of steel. THE STAR understands that at one point, Archer had two strange requests, ganja, and the female firefighter who tried getting him down the first time.

"Send mi back the woman and get mi a spliff," Archer allegedly said. Two pastors came and also pleaded in vain for him to come down.

Below, a crowd built up as persons, some in their nightwear, and some who were heading home stopped to video the movie-like scene. Some shouted "jump, jump", while others told Archer to let the security personnel take him down. It was a challenge for cops as they tried to get people to go home as the nightly curfew hour approached. One onlooker Easton Williams believed that the man was high on something.

"Him tell the fire people them that them must stop shine the light inna him face. This come een like one a dem action movie mi a watch. Mi a wonder if is a woman mash up him head," he said. Another bystander suggested that if he wanted to jump, he would have.

"The man smart and know what him a do. Mi tired a him now man and mi think even Jesus woulda tired to," the person said.

After soldiers arrived, THE STAR understands that each time they got close, Archer swung at them with the steel and went to the edge of the building. Firefighters waited below with a tarp to catch him if he jumped. Finally, Archer swung at a soldier who shot him in the leg. He was then disarmed, brought down from the roof, handcuffed and tied down to a gurney, and rushed to hospital.