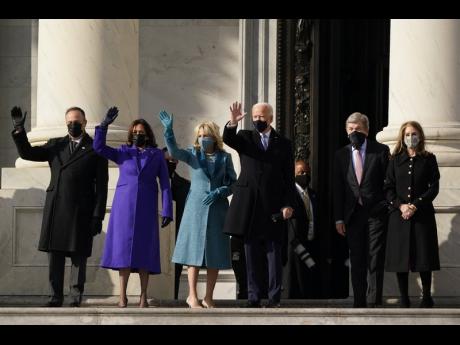 President-elect Joe Biden, his wife Jill Biden and Vice President-elect Kamala Harris and her husband Doug Emhoff arrive at the steps of the U.S. Capitol for the start of the official inauguration ceremonies, in Washington, Wednesday, Jan. 20, 2021. (AP Photo/J. Scott Applewhite)

WASHINGTON (AP) — President-elect Joe Biden has arrived at the U.S. Capitol ahead of his inauguration as the United States’ 46th president.

Biden and his wife, Jill, arrived at the complex on Wednesday morning, about 90 minutes before his noon swearing-in ceremony.

They were accompanied by Vice President-elect Kamala Harris and her husband, Douglas Emhoff, and were greeted by U.S. Sen. Amy Klobuchar of Minnesota.

The president-elect’s motorcade wound its way through a mostly deserted Washington following a morning church service at the Cathedral of St. Matthew the Apostle.

Streets that would typically be lined with thousands of inaugural onlookers were ringed instead with a massive security presence to include military vehicles and armed troops.

About 25,000 National Guard members have been dispatched to Washington following the violent melee at the U.S. Capitol two weeks ago.

Biden paused to wave from the Capitol steps before entering the building.

Joe Biden swears the oath of office at noon Wednesday to become the 46th president of the United States, taking the helm of a deeply divided nation and inheriting a confluence of crises arguably greater than any faced by his predecessors.