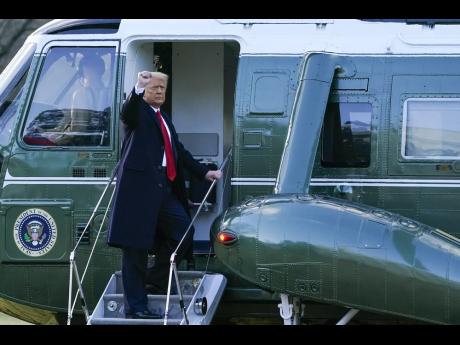 President Donald Trump gestures as he boards Marine One on the South Lawn of the White House, Wednesday, Jan. 20, 2021, in Washington. Trump is en route to his Mar-a-Lago Florida Resort. (AP Photo/Alex Brandon)

WASHINGTON (AP) — Donald Trump pumped his fist and waved as he departed the White House on Marine One Wednesday for the last time as president, leaving behind a legacy of chaos and tumult and a nation bitterly divided.

Four years after standing on stage at his own inauguration and painting a dire picture of “American carnage,” Trump departed the office twice impeached, with millions more out of work and 400,000 dead from the coronavirus.

Republicans under his watch lost the presidency and both chambers of Congress. He will be forever remembered for the final major act of his presidency: inciting an insurrection at the Capitol that left five dead, including a Capitol Police officer, and horrified the nation.

“It’s been a great honor, the honor of a lifetime. The greatest people in the world, the greatest home in the world,” Trump told reporters before heading to Marine One, rotors whirring, on South Lawn.

“We love the American people, and again, it has been something very special. And I just want to say goodbye but hopefully it’s not a long term goodbye. We’ll see each other again.”

Trump will be the first president in modern history to boycott his successor’s inauguration as he continues to stew about his loss and privately maintains the election that President-elect Joe Biden fairly won was stolen from him.

Republican officials in several critical states, members of his own administration and a wide swath of judges, including those appointed by Trump, have rejected those arguments.

Still, Trump has refused to participate in any of the symbolic passing-of-the-torch traditions surrounding the peaceful transition of power, including inviting the Bidens over for a get-to-know-you visit.

Marine One was headed to Joint Base Andrews where Air Force One was parked, a dramatic backdrop against the rising sun.

A red carpet has been placed on the tarmac for Trump to walk as he boards the plane.

Four U.S. Army cannons were waiting to fire a 21-gun salute to the president.Hundreds of supporters greeted Trump at Andrews.

By the time Biden is sworn in, Trump will already have landed at his private Mar-a-Lago club in Palm Beach, Florida, to face an uncertain future.

Trump will retire to Florida with a small group of former White House aides as he charts a political future that looks very different now than just two weeks ago.