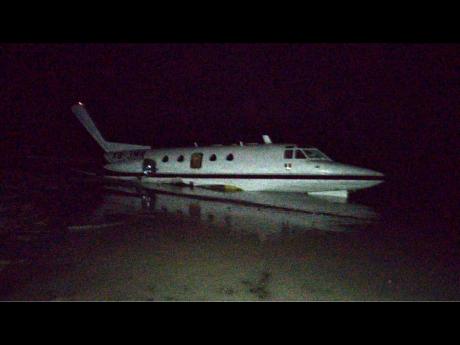 Before police and soldiers could reach the site where a small plane crashed in the fishing village of Rocky Point, Clarendon, curious residents descended on the aircraft.

It is reported that the plane which appears to have been de-registered in Aguascalientes, Mexico, crashed at approximately 7 p.m.

Eyeswitnesses revealed that inside the plane has been modified, with most of the seats removed.

Head of the Clarendon Police, Senior Superintendent Glenford Miller said neither the pilot nor any passenger was found.

“We just found an empty plane,” he said.

When asked about the possible contents of the aircraft, he said it was very dark and investigations were ongoing adding that some information will have to be shared later.

President of the District Area Committee Arthur Coleman said while it is not the first time has heard of plane coming in and leaving the area, it is the first the community has seen a crash.

“I don’t know the background behind it, but it doesn’t look good for Rocky Point. I will hasten to say that for a longest time we have been asking for a police post down this area or a coast guard,” he said.