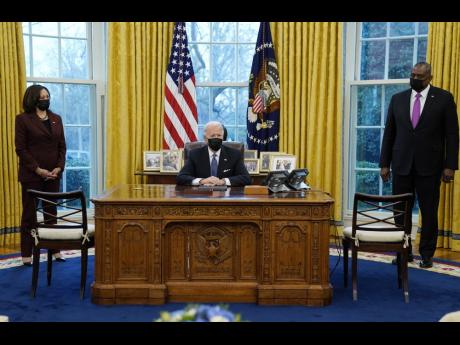 The new order, which Biden signed in the Oval Office during a meeting with Defense Secretary Lloyd Austin, overturns a ban ordered by President Donald Trump in a tweet during his first year in office.

It immediately prohibits any service member from being forced out of the military on the basis of gender identity.

“What I’m doing is enabling all qualified Americans to serve their country in uniform,” Biden said as he signed the order.

“America is stronger, at home and around the world, when it is inclusive. The military is no exception,” the order says.

“Allowing all qualified Americans to serve their country in uniform is better for the military and better for the country because an inclusive force is a more effective force. Simply put, it’s the right thing to do and is in our national interest.”

The order directs the departments of Defense and Homeland Security to take steps to implement the order for the military and the Coast Guard.

And it says they must reexamine the records of service members who were discharged or denied reenlistment due to gender identity issues under the previous policy.

It requires the departments to submit a report to the president on their progress within 60 days.

Austin, in a statement, voiced support for the change and said the Pentagon will work over the next two months to implement the new policy.

The Trump policy triggered a number of lawsuits, including from transgender individuals who wanted to join the military and found themselves blocked.

Under Biden’s new policy, transgender servicemembers won’t be discharged based on gender identity.

The decision comes as Biden plans to turn his attention to equity issues that he believes continue to shadow nearly all aspects of American life.

The move to overturn the transgender ban is also the latest example of Biden using executive authority in his first days as president to dismantle Trump’s legacy.

His early actions include orders to overturn a Trump administration ban on travelers from several predominantly Muslim countries, stop construction of the wall at the U.S.-Mexico border, and launch an initiative to advance racial equity.