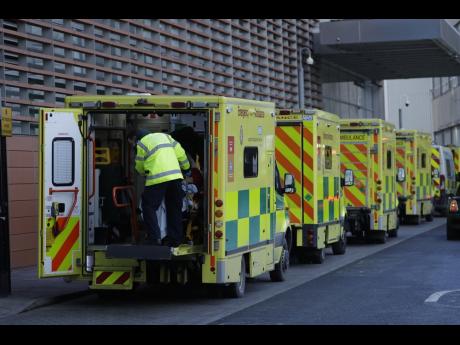 A patient arrives in an ambulance outside the Royal London Hospital in east London, Monday, Jan. 25, 2021, during England's third national lockdown since the coronavirus outbreak began. (AP Photo/Matt Dunham)

Government figures show that another 22,195 new cases have been recorded, the lowest since Dec. 15.

Monday’s figure represents a big decline from the previous day’s 30,004.

Though cases can be volatile on a daily basis, it’s clear that the country’s 7-day average has been falling over the past couple of weeks from near the 60,000 mark.

The U.K. saw a sharp uptick in new cases towards the end of 2020 and into the new year that was largely blamed on a new variant that first emerged around London and the southeast of England.

All four nations of the U.K. have imposed lockdowns in order to address that sharp spike.

The government also said another 592 people have been reported as dying after contracting the virus, taking the total to 98,531, Europe’s highest.