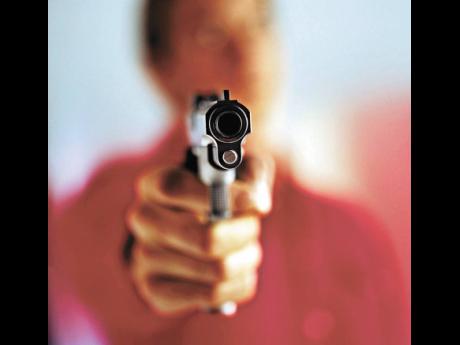 The extortionists who caused the work on a section of the Southern Coastal Highway to be shut down have threatened bloodshed if their demand for a fortnightly extortion fee of $100,000 is not met.

In an unsigned note, written in black ink on a piece of book leaf, the criminals described themselves as being part of a 'company'. The note, which is believed to have been sent to the foreman on the site, appears to have been penned by someone at war with the English language. The writer, however, made it clear that the 'company' was prepared to carry out deadly attacks if its demands were not met.

"... A corporation (sic) or slateration (sic), big money or big funeral fi you guys," the author said in the note.

The National Works Agency (NWA) yesterday announced that works along the Georgia to Cedar Valley leg of the project, the road improvement project in St Thomas, was suspended on the weekend following threats received from what appears to be extortionists.

"The worksite was closed even while critical wall construction and revetment protection works were in progress along sections of the badly deteriorated roadway," the NWA said.

The roadway is earmarked for extensive reconstruction and improvement including a new pavement, the upgrading of existing drainage features and the construction of new ones including culverts, the installation of shoulders in more rural areas, and new kerbs, gutters and sidewalks in built-up areas. Some $1.5 billion is being spent on the 15 kilometre-long Georgia to Cedar Valley corridor.

James Robertson, the member of parliament in whose Western St Thomas constituency the corridor is centred, said work resumed yesterday.

"We are adamant that we are not going to let this stop the building of our future, our roads and pipelines bringing us into the modern age. These are projects we have waited for all our lives for. This is a game changer for the young and old and we are not going to put up with distorted gremlins," Robertson said. "Thousands of us are together putting politics and everything aside to build our constituency and indiscipline individuals are not going to stall our efforts."

Head of the Jamaica Constabulary Force's Corporate Communications Unit, Senior Superintendent of Police Stephanie Lindsay, said that the police have taken steps to ensure the security of the project and the personnel associated with the worksite.

"We are aware of the threats and the police have met with the partners and players in the project and they have discussed some strategies in which they believe persons can be safe so as to ensure that the project can go on without interference of criminals. There should be further discussions and some strategies will be implemented," Lindsay told THE STAR.