UK speeds up vaccinations: All adults to get 1st jab by July 31 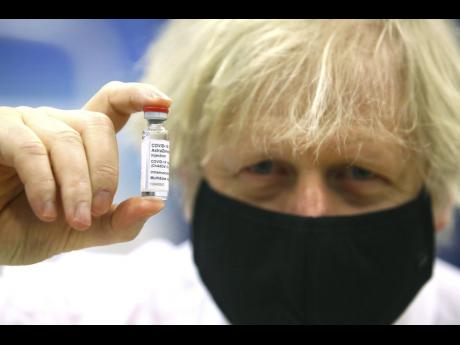 LONDON (AP) — The British government declared Sunday that every adult in the country should get a first coronavirus vaccine shot by July 31, at least a month earlier than its previous target, as it prepared to set out a “cautious” plan to ease the U.K.’s lockdown.

The previous aim was for all adults to get a jab by September.

The new target also calls for everyone 50 and over and those with an underlying health condition to get their first of two vaccine shots by April 15, rather than the previous date of May 1.

The makers of the two vaccines that Britain is using, Pfizer and AstraZeneca, have both experienced supply problems in Europe.

But U.K. Health Secretary Matt Hancock said Sunday that “we now think that we have the supplies” to speed up the vaccination campaign.

The early success of Britain’s vaccination effort is welcome good news for a country that has had more than 120,000 coronavirus deaths, the highest toll in Europe.

More than 17.5 million people, a third of U.K. adults, have had at lease one vaccine shot since inoculations began on Dec. 8.

Britain is delaying giving second vaccine doses until 12 weeks after the first, rather than three to four weeks, in order to give more people partial protection quickly.

The approach has been criticised in some countries — and by Pfizer, which says it does not have any data to support the interval — but it is backed by the U.K. government’s scientific advisers.

News of the new vaccine targets came as Prime Minister Boris Johnson met Sunday with senior ministers to finalise a “road map” out of the national lockdown.

He plans to announce details in Parliament on Monday.

Faced with a dominant virus variant that scientists say is both more transmissible and more deadly than the original virus, Britain has spent much of the winter under a tight lockdown.

The government has stressed that economic and social reopenings will be slow and cautious, with nonessential shopping or outdoor socialising unlikely before April.

Many children will go back to school beginning on March 8 and nursing home residents will be able to have one visitor from the same date.

Johnson’s Conservative government has been accused of reopening the country too quickly after the first lockdown in the spring.

The number of new confirmed cases, hospitalisations and deaths are all declining in February but remain high, and Johnson says his reopening road map will follow “data, not dates.”