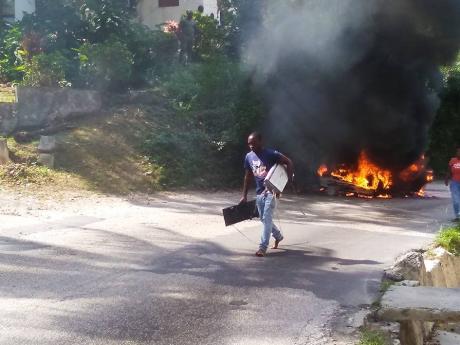 The driver of the car that burst into flames walks away with some of the music equipment he was able to salvage. 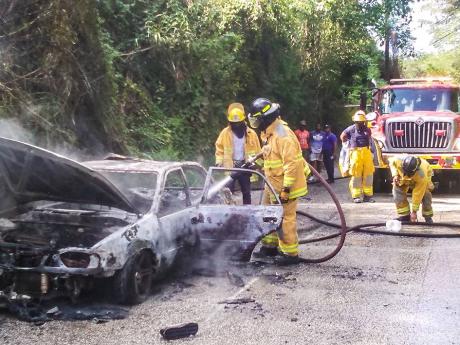 A man narrowly escaped being burnt alive yesterday after his Toyota Corolla motor car burst into flames, while he was travelling along a section of the Long Hill main road in St James.

The fire, which lasted for more than an hour, resulted in a major traffic pile-up which stretched for several miles.

When THE STAR reached the scene, dozens of residents and other motorists were assisting the man in an attempt to put out the raging fire. But this was unsuccessful. The driver was left barefooted and with a few pieces of musical equipment which he salvaged.

Reports are that shortly after 2 p.m., the driver was travelling from Reading to Anchovy. However, the vehicle developed electrical problems and caught fire.

The driver managed to jump out of the vehicle and attempted to put out the blaze with a bucket of water which he acquired from a neighbouring yard. But the fire was too high and the vehicle was consumed by fire.

The Freeport Fire Department was called, and upon their arrival, they managed to put out the fire after several minutes, while the driver, who is believed to have received some burns, was quickly transported away in another vehicle. The police were also summoned, and for over an hour, got traffic flowing normally.

"Boy, Long Hill is a disastrous stretch a road, " one motorist told THE STAR. "Dem need fi hurry up wid the bypass, because a pure disaster a tek place pon Long Hill an di Government need fi realise that. When a nuh flood, a car a crash all bout pon the road. A full time the Government do something 'bout this cursed piece a road, and mi glad seh the youth nuh burn to death, because a nuff time mi witness car ketch a fire after dem a come up Long Hill."