Nearly 6,000 pounds of cocaine seized by US Coast Guard in Caribbean Sea 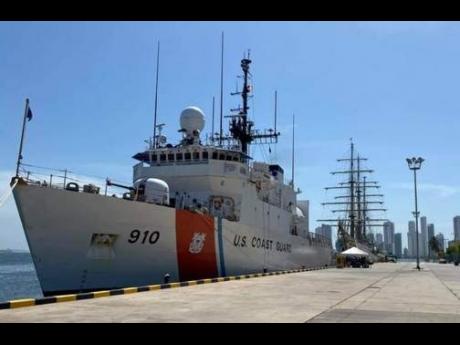 Florida, United States (CMC) — The United States Coast Guard said Monday that crew from its Cutter Thetis returned, after a 43-day patrol in the Caribbean Sea, during which the crew interdicted three drug vessels and seized close to 6,000 pounds of cocaine with a street value of about US$82 million.

“By making our presence known in the Caribbean, we continue to disrupt the flow of illicit and dangerous drugs into the United States,” said Commander Justin Nadolny, Cutter Thetis commanding officer.

It said the Thetis' crew launched an MH-65 helicopter, which stopped the go-fast vessel with disabling fire, “and resulted in an estimated 1,100 pounds of cocaine disrupted and the apprehension of two suspected smugglers”.

During that case, Thetis' crew utilised an MH-65 helicopter and stopped a go-fast vessel “with precision fire to the vessel's outboard engine, resulting in an estimated 1,220 pounds of cocaine seized and the apprehension of three suspected smugglers,” the US Coast Guard said.

It said the crew also conducted joint counter-narcotics operations with the Colombian Navy.

While patrolling with one of the partner nation's ships, the US Coast Guard said the Thetis' crew conducted communications exercises, “showcasing the teamwork and joint interoperability between the United States and Colombia”.

The US Coast Guard said the counter-narcotic interdictions were in support of Campaign Martillo, “a multinational counter-narcotics collaboration to disrupt transnational criminal organisations that threaten global security and prosperity”.

Martillo is led by Joint Interagency Task Force South, a component of US Southern Command, and supported by 15 US and 21 international agencies, the US Coast Guard said.