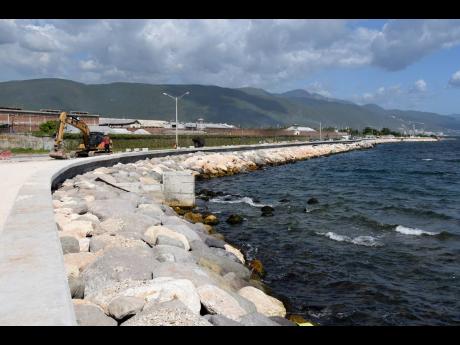 A section of the newly built seawall in downtown Kingston. 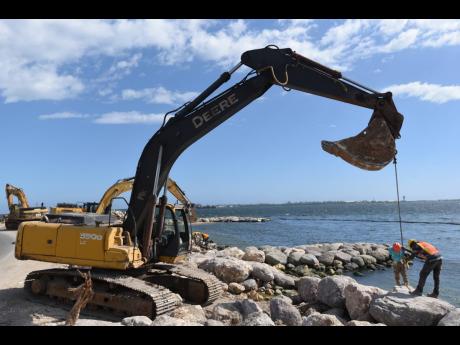 The creation of the boardwalk, similar to the one on the Palisadoes strip, is expected to add to the appeal of downtown Kingston, which is undergoing redevelopment. 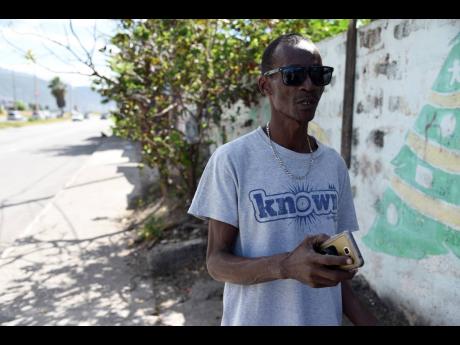 Melvin Turner said that the project has brought jobs to the area. 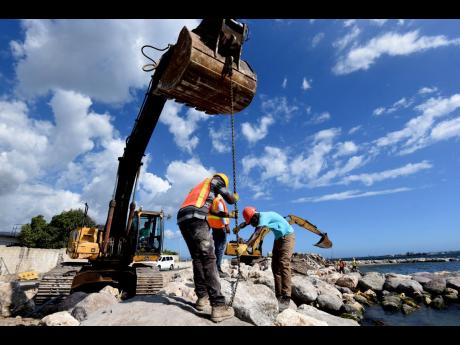 Crewmen working on the newly built seawall in downtown Kingston.
1
2
3
4

When the Port Royal Street Coastal Revetment Project in downtown Kingston is completed, persons will be able to stroll along the boardwalk and gaze at the Kingston Harbour.

The creation of the boardwalk, similar to the one on the Palisadoes strip, is expected to add to the appeal of downtown Kingston, which is undergoing redevelopment. The project, which commenced last March, is a major one that has been undertaken to protect the shoreline from further erosion. It involves the creation of a massive seawall, which stretches from Rae Town to the Ministry of Foreign Affairs and Foreign Trade building on Port Royal Street. The existing roadway will be improved and the boardwalk installed.

"We are about 80 per cent complete with the revetment work and the boardwalk works will start shortly after," said Omar Sweeney, managing director of the Jamaica Social Investment Fund, which is implementing the $950-million project.

Sweeney said that the works are expected to be completed by July. Downtown Kingston has been experiencing a rebirth is recent years, especially with the opening of Ribbiz, a top entertainment spot, and the famous fish place, Gloria's, on the Kingston waterfront. The boardwalk, brought about by the revetment project, is likely to add to the lustre.

Sweeney said the boardwalk "will have old-fashioned pedestal lighting", it will be fairly wide and will follow the coastline in the manner in which the wall is built. The construction project has been providing jobs for several persons in Rae Town and nearby central Kingston communities.

"A whole heap a youths get work and mi feel like it a guh shine a more positive light on the community. Rae Town a guh become like a commercial space, so even the fisherman dem a guh benefit," said Melvin Turner, who has lived in Rae Town for more than three decades.

Rose Heslop, a small business owner, said she is already benefiting from the project as she has seen an increase in sales.

"Mi have mi likkle stall and the workman dem will come buy, and ting. This will draw people to Rae Town. The only thing mi would hope them have is something for the kids, because right now there is not much entertainment for children anywhere," she said.

Sweeney said that based on the feedback he has been getting about the project, it seems that persons are eagerly awaiting its completion.

"Persons are looking forward to not only the obvious benefits that will come, but the economic benefits in terms of bringing back Rae Town to being an entertainment hub. The boardwalk itself is going to give opportunities for persons to do legalised vending and there will also be a exercise stretch," Sweeney said.

"It really started out as a shoreline protection project because the wave action was actually eroding the roadway in that area. However, what we are doing is taking advantage of the infrastructure that is there to make it community-friendly and a benefit to all Jamaicans," Sweeney added.