Japan to donate more medical supplies and equipment to Jamaica 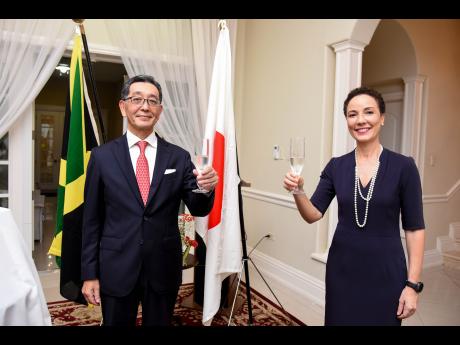 Ambassador of Japan to Jamaica, His Excellency Masaya Fujiwara (left) and Minister of Foreign Affairs and Foreign Trade, Senator Kamina Johnson Smith, raise a toast to celebrate the 61st birthday of His Majesty the Emperor Naruhito of Japan, during a reception held at the Ambassador’s residence in Kingston, on February 23.

The Japan government will be making another donation of medical supplies and equipment to Jamaica, in support of the country’s effort to improve the quality of healthcare during the COVID-19 pandemic.

This was announced by Ambassador of Japan to Jamaica, His Excellency Masaya Fujiwara, at a reception held on Tuesday, to mark the birthday of His Majesty the Emperor Naruhito of Japan.

February 23 was the 61st birthday of the Emperor, who acceded to the throne in May 2019 as the 126th Emperor of Japan.

Ambassador Fujiwara said that the supplies, worth some US$2 million, have arrived in the island.

“Various cooperation is going on in the medical area between Jamaica and Japan. Medical equipment and materials have now arrived in Jamaica and will soon be delivered,” he said.

He said that the Japanese government had recently signed a cheque at the Mandeville Regional Hospital for the provision of an ambulance, through the Grassroots Human Security Project.

Additionally, the Ambassador said there will be a contribution of some US$130 million to the COVAX facility to support the provision of COVID-19 vaccines to developing countries, including Jamaica.

In an effort to enhance cooperation between Jamaica and Japan, the Japanese Ambassador further underscored his country’s commitment to provide a nationwide digital radio communication system for disaster prevention through the grant of approximately US$13 million.

“Also, as Japan is accelerating green transformation to reduce greenhouse gas emissions to net-zero by 2050, we will tackle the issue of the introduction of renewable energy, promotion of energy-saving technology as well as the problem of plastic waste in the ocean,” he added.