In big shift, Germany to give AstraZeneca shots to over persons over 65 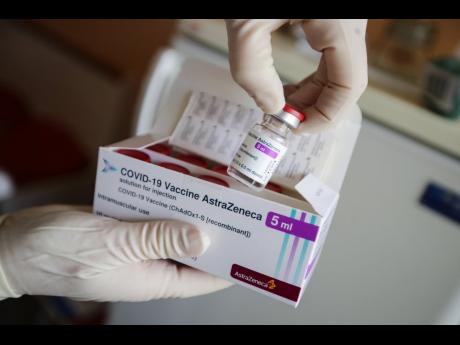 A package of the AstraZeneca COVID-19 vaccine is shown in the state of Brandenburg where the first coronavirus vaccinations are given in doctors' surgeries, in Senftenberg, Germany, Wednesday, March 3, 2021. (Hannibal Hanschke/Pool via AP)

The decision is “good news for older people who are waiting for a vaccination,” German Health Minister Jens Spahn said. “They will get vaccinated faster.”

The vaccine made by British-Swedish company AstraZeneca is one of three authorised for use in the 27-nation European Union, though it has not yet receive the green light from U.S. regulators.

Several countries, including Germany, initially restricted it to people under 65, or in some cases under 55, citing a lack of data on its effectiveness in older people.

But the publication of new data on its effectiveness, and pressure to speed up the EU’s slow vaccine rollout, has prompted authorities across the bloc to revise their stances.

The independent committee, known by its German acronym StiKo, said its decision was based on “intensive analysis and assessment of new study data” from England and Scotland, which it said “for the first time provide robust results on the good effectiveness of the vaccine in higher-age groups already after one dose.”

The data published this week from England’s mass vaccination program showed that both the AstraZeneca and the Pfizer-BioNTech vaccines were around 60% effective in preventing symptomatic COVID-19 in people over 70 after just a single dose.

The analysis released by Public Health England, which hasn’t been peer-reviewed yet, also showed that both vaccines were about 80% effective in preventing hospitalisations among people over 80.

Britain, which has had a notably successful vaccination rollout, has been going with the 12-week spacing for vaccine shots since last year.

Finally, StiKo also suggested that people who have recovered from a coronavirus infection should receive a single-dose vaccination no sooner than six months after being diagnosed with COVID-19.

The panel said its previous recommendations in January were based “totally correctly on the then-available data.”