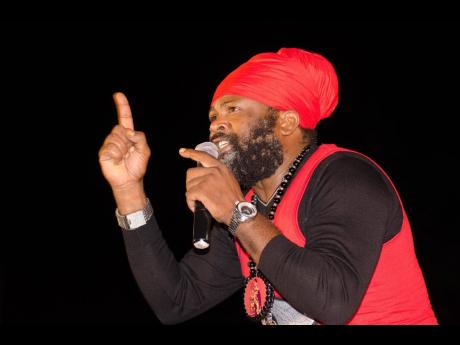 Reggae-dancehall artiste Fantan Mojah said that mandatory vaccinations is something entertainers, especially those of Rastafarian faith like himself, are used to, and would have to come to terms with, if not now, then later.

"From ever since, as children, we have been getting vaccinated and when travelling to certain places like Africa to perform, you have to take the vaccines," Fantan Mojah told THE STAR. The Nuh Build Great Man artiste did not confirm if he was thinking of getting the COVID-19 vaccine once it is made available to the general public. However, he did say that when that time comes, persons within the music industry who are Rastafarians won't be able to reject it if they wish to travel and perform.

"Don't let none of dem weh seh dem a fly all 'bout the world say different. As me say if a Africa, or any place weh have malaria and ebola, dem do get vaccines, maybe not the injection but in the pill form. Dem tek dis religious ting an' spiritual ting and gwaan like seh dem nah do it, but dem a dweet!" a passionate Fantan Mojah exclaimed.

A member of the Bobo Shanti religious group, Fantan Mojah said he does not believe entertainers are willing to jeopardise a booking or collect payment for a booking because vaccinations are enforced.

The entertainer revealed that he has not travelled for about a year, he keeps up to date on world news and is very aware of the protocols and various vaccination programmes.

He said "From a person tests negative, dem can still fly but di system set a way. Wah mi nuh agree with is this I don't feel dem fi force on the vaccine because people have their rights man ... let who needs to take it, take it," he said.

The first phase of Jamaica's vaccination programme began yesterday morning with healthcare workers leading the charge. Although taking the jab is not mandatory, Prime Minister Andrew Holness, via Twitter, encouraged Jamaicans to make arrangements to be inoculated, adding that the distribution of safe and effective vaccinations was essential to containing the global pandemic.