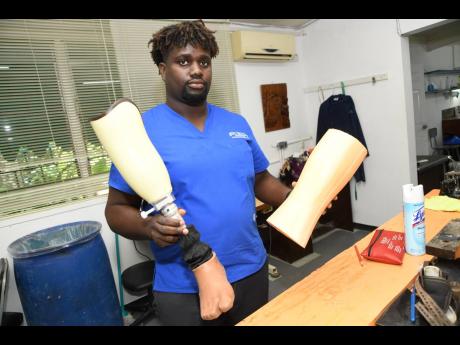 Lasana Pryce made the switch from being a driver to helping people without limbs. 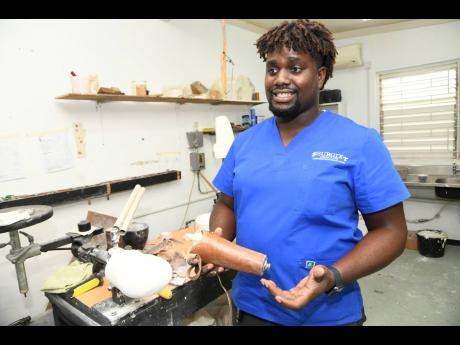 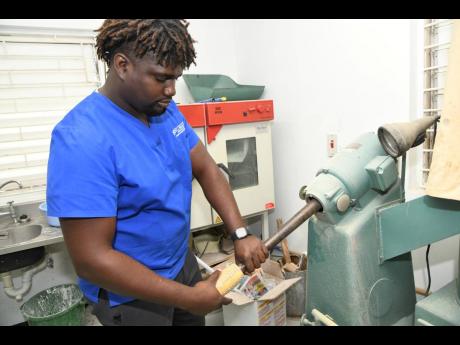 A prosthetic limb being shaped by Lasana Pryce.
1
2
3

When Lasana Pryce started working at Surgix Jamaica four years ago as a driver, he never guessed that he would one day be fitting persons with prostheses.

He was eager to learn how the artificial limbs are created and fitted to the comfort of an individual. And so, in between his tasks of driving, he would tuck himself away and do research on the rehabilitation for amputees.

"I love knowledge. I love new things, I hate ignorance. I was the company's driver at first and I saw the work prosthetic technicians do and I liked it so I got training by some overseas technicians and here I am," he said, smiling in his navy blue scrubs.

A prosthetic technician, as described by Pryce, is one who wraps and measures an individual's stump, then designs or repairs prosthetic devices fitting for the patient's arm or leg.

For the past two years, Pryce has officially adopted his new job at Surgix, which is responsible for all prostheses manufactured at the Sir John Golding Rehabilitation Centre in Mona, St Andrew. This is a job he holds in high esteem, being able to help persons walk again. The West Kingston native reflected on a 50-year-old patient who he fitted last week. The encounter almost moved him to tears.

"She kept saying to me that you don't understand how it feels to be without a limb, because it's rough. After I finished covering it, it looked exactly like her foot and she loved it. She constantly told us thanks. It is just that satisfaction and gratification from the customers and being able to help them walk again. That gives me the hope to come to work each day," Pryce said.

When THE STAR visited his office yesterday, Pryce shared that he was making preparations to fit a prosthetic leg on a three-year-old who was born with only one limb. In the workshop, there were artificial legs being carved. He maneuvered the machines with ease.

He carefully measured the socket, making sure that it is not too loose or tight, but that it would fit neatly on the child's leg. He used his hauling key to tighten the screws, his face telling the tale of contentment. Pryce pointed out that each prosthetic device is unique and is made specific to the needs of the patient.

"After making the socket, we go ahead and assemble the foot. Then we turn the patient over to the therapist so they can get accustomed to the new leg and walking properly. If there needs to be any adjustment, we do that as well," he said.

The Holy Trinity High past student shared that as a youngster, he had eyes set on becoming a mechanical engineer. He said that he takes on jobs in that area in his spare time, but stressed that "I would never leave this job." "I have grown to love this more and I have no regrets in my decision," he said.

Pryce, 27, said there are no great difficulties in his job but said it takes copious amounts of patience to deal with customers who are transitioning to walking.