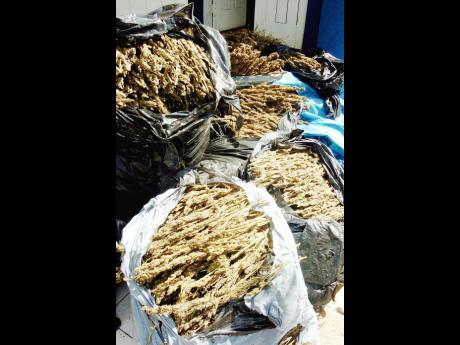 Georgetown, Cayman Islands (CMC) – The police have arrested two men following a drug operation that took place earlier this week in which a police helicopter spotted and interrupted what appeared to be a drug transfer at sea between a local boat and a canoe from Jamaica.

The police say its Air Operations Unit was conducting security patrols on Monday afternoon when it spotted two vessels appearing to meet up around 30 miles off the coast of Grand Cayman.

As the chopper approached, the two boats separated and sped off in opposite directions.

The vessel that set off in the direction of Jamaica was seen discarding a number of packages as it went, while the other set a course for Grand Cayman, according to the police.

They say that the Cayman Islands Coast Guard was then directed to the location of the packages and the officers recovered 22 packages from the sea that contained approximately 770 pounds of marijuana.

A few hours later, the police detained a vessel in local waters and arrested the Caymanian men who have since been released on bail as the investigation continues.