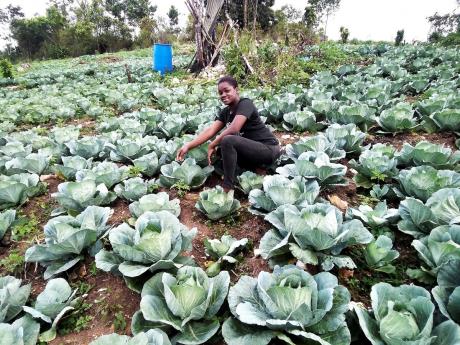 Sherika Braham, a young farmer of Woodland district in St Elizabeth, is seen here attending to her massive cabbage field. 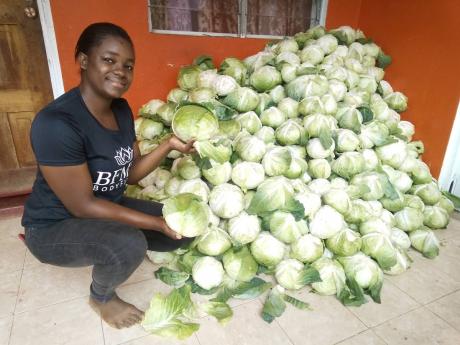 Farmer Girl Jessie is in search of market for her cabbage. 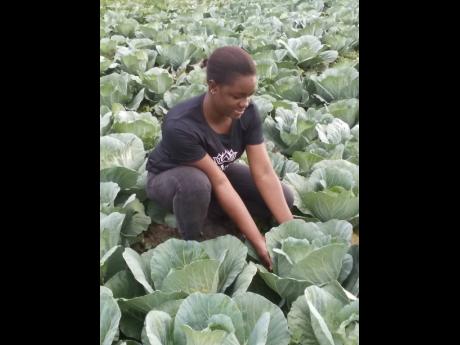 Farmer Girl Jessie is in love with farming. She is struggling to find market for her cabbage.
1
2
3

Having invested heavily in a crop of cabbage that has now come to maturity, 25-year-old Sherika Braham was hoping that she would be smiling at this stage of the process. Sadly for the Woodland district, St Elizabeth resident, she has been having difficulties finding market for her produce.

Braham, who is affectionately called 'Farmer Girl Jessie', said she spent her all to cultivate a large cabbage crop. She now has thousands of pounds of the vegetables in the fields and there are no buyers.

"Myself and other farmers now have a pile up of cabbage and nowhere to put it. We are forced to sell the crop at a very low price for it not to go to waste," she told THE STAR.

This is not the first time that the mother of two has been forced to face the harsh realities of the unpredictable nature of farming. Her farm was raided by thieves who dug out thousands of dollars worth of sweet potatoes and reaped all her sweet peppers, forcing her to start over. She has since invested her money and time into cabbage farming, but the soft market is giving her a beating.

'Farmer Girl Jessie' stressed that producing cabbage is a costly venture. She said that in addition to paying workmen, one has to buy pesticide to spray the patch at least twice per week.

"From planting to harvesting is workmen and spending, and now we are forced to sell it to vendors for $20 per pound," the young farmer said.

'Farmer Girl Jessie', who has been farming since her teenage years, said that prior to the COVID-19 pandemic the vegetable could easily be sold in the hotels. That market has all but dried up as the tourism sector is now on life support.

"Right now farming is in a devastating condition. I have hundreds of thousands of pounds of cabbage with no substantial buyers, and all my money is tied up in this crop," she bemoaned.

A passionate farmer, she said that she wants nothing more than market and a fair price for her produce at this time. She stressed that agriculture has been her avenue of focus since she was 15 years old.

The St Elizabeth woman recalled travelling to the Charles Gordon Market in Montego Bay, St James, with her mother to sell farm produce when she was 13. 'Farmer Girl Jessie' was 15 when her mother died. She began sending herself to school, through farming and selling at the market, but dropped out after she became pregnant.

"Being a mother at the age of 15, having a child, having to think about school, and assisting in taking care of my two younger siblings, it was too hard. So what I did was that I just focused on farming," said the Woodland woman as she looked at a heap of cabbage that is awaiting a buyer.