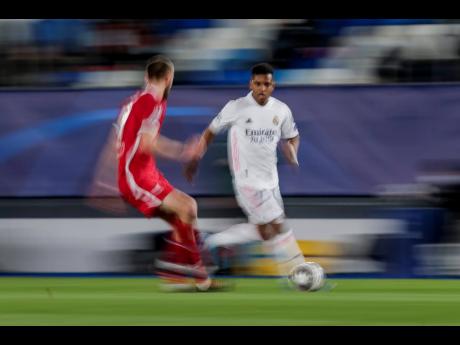 Vinicius Junior finally came up with the type of performance Real Madrid fans have been expecting from him.

The Brazilian forward netted his first double for the club yesterday, leading them to a 3-1 win over Liverpool in the first leg of the Champions League quarter-finals.

The youngster tormented the Liverpool defence all night and was precise with his finishes, moving the Spanish powerhouse closer to the semi-finals after a two-year absence.

"People outside of the club criticise me, but I keep working hard," the 20-year-old Vinicius Junior said. "That gives me the strength to arrive at an important moment like this and score the goals that the team needed."

Marco Asensio also scored for Madrid, who took full advantage of Liverpool's defensive blunders in the first half to take a commanding lead ahead of the second leg in England.

Mohamed Salah netted the lone goal for Liverpool early in the second half before Vinicius Junior sealed the victory for the hosts.

Manchester City defeated Borussia Dortmund 2-1 at home in the other quarter-final.