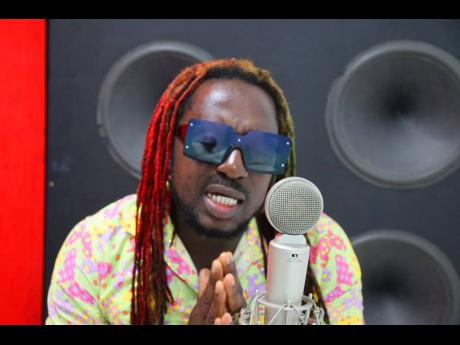 Dancehall-reggae artiste Hot Topic knows the true meaning of a mother's love, and that's why he penned the song Mama I Love You.

"The song is based on my true life story, the struggle I had to go through. My mother had 11 kids and she raised six more with her 11. It was 22 of us grow up in a one bedroom house. My mother used to cut up rice bag and stuff it with grass to sleep on, it was rough," said the artiste, given name Calvin Wisdom.

He grew up in the Bloomwell district of Clarendon with his siblings. Hot Topic said it was his mother's love that literally kept him alive.

"My mother loved me a lot. I had it really rough. When I was young, I was sickly and people used to talk say 'duppy deh pon me' and she admitted to me that several times, she left mi a roadside ah Spaldings because of the pressure and she turned back for me every time. She fight with me, do the best for me, a real mother's love. That's why I am alive today," he said.

At age 11, Hot Topic moved to Waterhouse to live with an aunt, never completing secondary school. When he became an adult and left his aunt's house, the struggle only intensified.

"Sometimes for three months, mi no eat, no cook food. Mi eat June plum and ripe guava. If me hustle a money and buy a bulla, mi mek it serve me all three day," he said.

Hot Topic walked to studios all over Kingston and even Spanish Town to record songs. He entered Digicel Rising Stars in 2008 and the festival song contest twice, under the monikers Rasta KeeKee and King Solomon, respectively. Both times he made it to the top 10. In 2019, he linked up with producer Power Forbes and started to fine-tune a new sound, changing his name to Hot Topic.