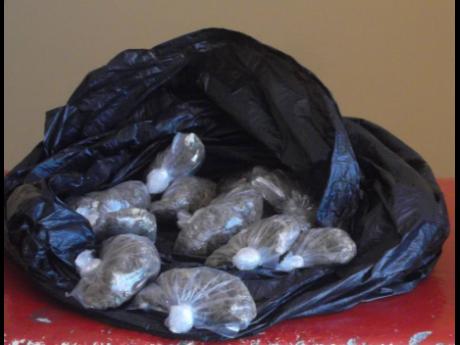 A St Mary resident yesterday gave an emotional explanation for his attempt to transport drugs from Jamaica to Barbados when he appeared in the Kington and St Andrew Parish Court.

The 32-year-old man pleaded guilty to offences under the Dangerous Drugs Act, possession of ganja, dealing in ganja, taking steps to export ganja and conspiracy to export ganja.

He told Senior Parish Judge Lori-Ann Cole-Montague that he took an offer to transport 11 pounds, four ounces of the drug across the Caribbean, in a desperate need to provide for his family and his unborn child.

"At first when the person came to me, I didn't want to do it but when I went home and looked at the bed, it had a lot of springs in it and I saw my babymother and my unborn child, I wanted to change that situation. But I didn't have any money, so I just took up the offer. I'm the breadwinner in my family, and it is stressing on me, my babymother and her three children plus I take care of my mother. It really stressing, Miss, and I'm really sorry that I did it, but me just did want help out my family 'cause we really nuh have it," the man said.

He was caught by members of the Narcotic Division at the Norman Manley International Airport with the parcels in his luggage.

"Look at the excitement you bring down on the babymother? What a pickle you put yourself in. Sir, what a foolish thing you do. You wanted the best for your family and get mixed up in ganja? But you know what I like about you, you have said to me 'Judge, I am guilty' and you gave me an explanation and that sort of thing. I appreciate your honesty,"she said.

He was offered $250,000 bail with up to two sureties by Cole-Montague with bail conditions. A fingerprint order was made and a stop order was placed. He is to report to the police four times a week and to surrender his travel documents. The judge postponed sentencing to allow him enough time to procure the funds to pay the fines.