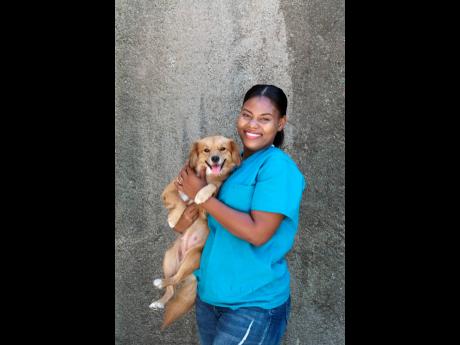 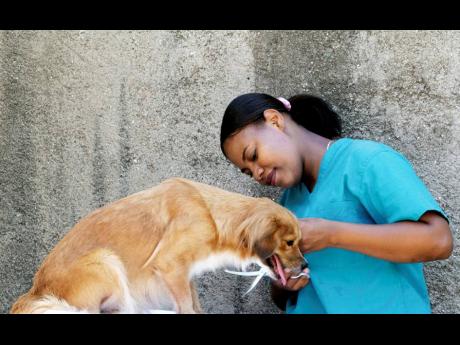 Deja Gordon took ownership of her animal farm -- with sheep, pigs and horses -- at an early age, all of which moved to the tune of the old nursery rhyme, Old McDonald. This toy farm helped shape her love for animals, which later propelled her desire to pursue a career in veterinary science.

Gordon's parents allowed her to have cats and dogs, which she would pay keen attention to daily, administering care and grooming when possible. The Spanish Town, St Catherine, native is yet to be qualified as a veterinarian, but it is a goal that she has set for herself. She is currently the proprietor of Deja's Grooming Services, catering to the appearance of dogs. Gordon said she took the advice of her mentor, Dr Jason Wright, who told her that there was a growing need for grooming services of small animals.

Acting on his guidance, the 26-year-old gripped her shears and clippers, and began catering to her customers' mane in August last year.

"Grooming your dog on whole is a must do. Once you make that decision to get a dog as a pet, especially if it is a long-haired dog, or even if it is a short-haired dog, grooming is very necessary. Also, I think that is what most dog owners are realising nowadays. Grooming is important for their (the dog's) health and as the owner," Gordon shared.

This is not new for the Jonathan Grant alumnus, who would spend copious amount of time volunteering at animal clinics at the Jamaica Society for Prevention of Cruelty to Animals (JSPCA) prior to enrolling at the Portland-based College of Agriculture, Science and Education in 2018, where she earned her associate's degree in veterinary science.

The mother of one spends most of her days a zookeeper at the Hope Zoo, but anticipates the weekends when she gets the opportunity to give dogs a complete transformation. It is an experience that she describes as fulfilling.

She beamed with pride as she relates the evident joy a dog shows when the grooming exercise, which involves almost two hours of cutting, de-mating and cleaning their undercoat, has been completed. Gordon said that there is a bond that is shared between her and the animals, that improves each time they are cared for.

"Initially, they are not friendly but while grooming them, the relationship that you develop with each other, they are so happy with you. They are not barking at you anymore, and that is definitely one of the good parts of the job. I don't just do it for the money, I do it for the love as well and for the animals. I remain motivated because this is my passion and a life-long dream that I have. There is no other career I see myself working in other than animals, there is absolutely nothing else I find fulfilling," she said.

The entrepreneur took the time to debunk some misconceptions about grooming and advised pet owners to exercise caution with the animals.

"When they are bathing the dog, they feel like they should wash out the dog ears with water. Well, that is definitely not right to do. You want to avoid water getting inside the ear, because that is the perfect breeding ground for bacteria and infection to develop. When grooming dogs at home, use a cotton ball or a rag that is damp and clean outside the earlobe. Also, be careful when clipping nails, because you don't want to clip too close to the blood vessel as it will cause bleeding and it will cause the dog not to trust you again. So you have to be careful," she stressed.

Her tools -- curve scissors, slicker brush, sheers with different blade sizes are just a few that helps to get the job done. But she stresses that it is important to have patience, a love for animals and an eye for details to be successful at the job.

Gordon told THE STAR that being a pet groomer is just part of her journey on becoming a veterinarian, and later on specialising in diagnosing and treating horses. Although it is a time-consuming task, she has no intention of giving up her dream.

"I got accepted to St Nicholas University in Dominica to pursue a doctor in veterinary medicine next year September. I received the CARICOM Merit 50 per cent scholarship and I am seeking to get the other 50 per cent. It will be five years of studying and after that five years, I will be coming back home to work in the equine field and, hopefully, small animals. I also intend to develop my mobile grooming business," Gordon said.