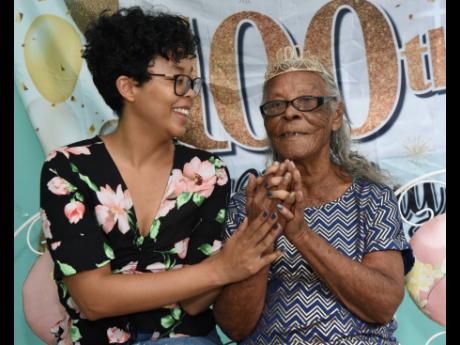 Inez Jones enjoys the company of her great-granddaughter, Sachia Chin Loy, at her 100th birthday celebration on July 18. 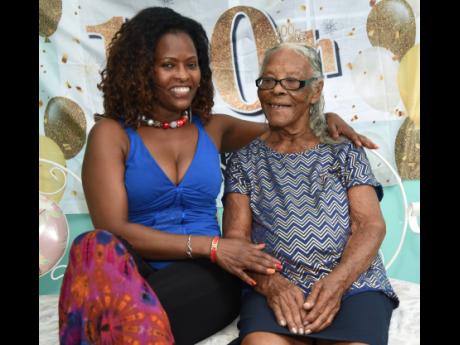 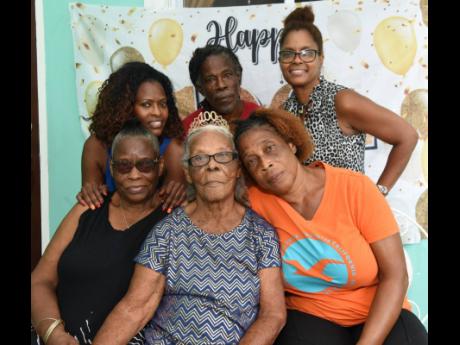 Born in Barbary Hall in St Elizabeth 100 years ago, Inez Jones left the breadbasket parish in her early 20s and settled in Homestead, a community outside of Spanish Town, St Catherine, where she raised her family.

Jones, who reached the century mark on July 18, experienced hardship as a young woman trying to survive in Homestead, but she never succumbed to the trials, nor did she allow the unpredictable nature of the community to restrict her growth.

She got married in 1962 to Agustos Jones and the union produced seven children, three boys and four girls. She had one son before the marriage. Sadly, in 1971, Agustos died, leaving Inez with the responsibility of performing the roles of mother and father to the children.

The centenarian, affectionately called 'Mama Inez', told THE STAR that after the death of her husband she knew she had to step up for the children, and it was not easy being the breadwinner and caregiver.

Jones learnt dressmaking when she was growing up in St Elizabeth. She said that her parents were not only disciplinarians, but they were also serious about ensuring that she and her siblings had skills with which they could earn.

"Mi nuh grow bad, mi grow good; and mi glad she teach mi de way," Jones said of her mother. "If she cook, the plate them can't stay til tomorrow morning. If a 12 o'clock a night dem haffi wash up and drain. Mi never go a gate go sit down, mi always find something to do in the house," she added.

The traits she learned from her parents, plus her dressmaking skills, were all she knew, and coupled with stints of goat-rearing and planting of some food crops in her yard, that was how she cared and provided for her family.

"Mi work hard fi mind dem, mi nuh do domestic work; mi sew clothes and brassiere. The Chiney man down King Street, mi buy the strap dem from him and mek the brassiere, and sew baby clothes. Mi couldn't sew them fast enough, and mi raise goat and plant dasheen and yam in a de yard. Mi tek care of all a dem and the grandpickney dem," she added.

Saluting the milestone reached by their matriarch, Jones' children and grandchildren hosted a birthday party in her honour. Daughter Iona Jones, 73, described her as the most wonderful mother one could have.

"She is a special mother and one of the best dressmakers around. She sewed bras and panties, and I would help her to sell them. She never let us go hungry, she did her very best as a single parent, when my father died, to raise us up the right way," Iona said.

Similar sentiments were expressed by her other children, Morine and Kenneth.

"She love to beat, but she was cool; she beat us for our own good. One thing I will say, she fry the sweetest fried dumplings," said Morine.

Jones attributed her longevity to the mercy of God, still walks around her house and sweeps her yard daily.

"Mi live long because a God. A him keep mi, and mi a go live longer," the centenarian said.