Family of crash victim feared for his safety 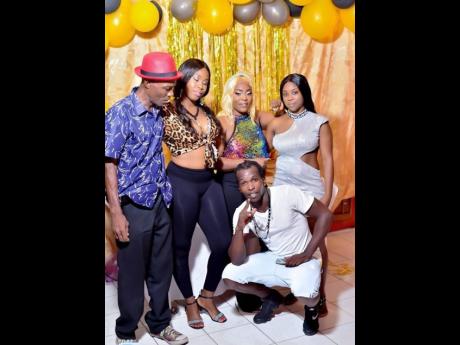 "If me did see him on the bike yesterday, me woulda never make him drive off. Him wouldn't dead."

That was the lament of Davia Daley, whose brother Steve Daley died in a motorbike crash on Monday. Fighting hard to hold back the tears, Davia said Steve called her hours before his death on Monday and asked if she had cooked.

"Me say no, me nuh cook anything because we cook big Sunday dinner so a 'Sunday-Monday' we a eat, but if you want anything in the shop, you can come for it. When me hear the bike, me rush out my shop and a look fi see him fi call him back because a did curfew time but by time me fi say anything, him just flash and gone," Davia said. Moments later, she received the heartbreaking call that her only brother had crashed. Information from the police's Public Safety and Traffic Enforcement Branch report states that about 7:30 p.m., a Honda motorcycle was proceeding easterly along Hagley Park Road. It is alleged that the motorcyclist lost control and collided into a concrete wall on the eastbound side of the roadway. The driver suffered multiple injuries and was taken to the Kingston Public Hospital where he died while undergoing treatment.

Friends gathered at Daley's home in Seaview Gardens, St Andrew, expressed shock at the passing of the 32-year-old, who they described as a jovial, hard-working individual who supported his family. Daley was injured months ago while driving the bike and relatives warned him to exercise caution. His aunt, Grace Campbell, said she often told him to slow down.

I always warn him

"When me see him buy the bike eight months ago, me ask him why him never buy a car with it? I always warn him when me see him on the bike. When we get the news, we were in shock, we couldn't believe that. We always talk to him," Campbell stressed.

Daley's death brings the number of motorcycle deaths to 99, as at August 3. Dr Lucien Jones, vice-chairman of the National Road Safety Council, told THE STAR that there have been 279 reported road deaths since the start of the year, a 13 per cent increase over the corresponding period in 2020. He added that based on predictions by the Mona GeoInformatics Institute, there will be at least 480 deaths in 2021.

"We are on a real crisis here and what we have been saying for some time, is the same thing that applies to our efforts to flatten the curve of the deaths and hospitalisations in respect to the coronavirus. We need to mobilise the entire country to flatten the curve of the number of motorcyclists. That is the number one category of road users who are dying on the roads. Secondly, the pedestrians and private motor car drivers," he said.

Jones said the internationally acclaimed Safe System Approach will be introduced in an effort to reduce the number of road deaths. He said work is under way with the revision of the speed limits and the use of the breathalyser system.

"We are working to train motorcyclists to wear helmets, [because] those who wear helmets have a fighting chance. Helmets help to reduce head injuries, which is a major problem, by up to 40 per cent. We are going through the system one by one to see how we can effectively make a big difference," Jones said.