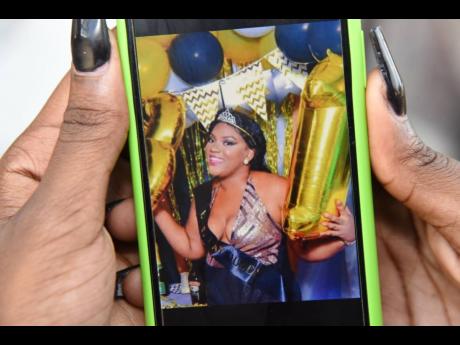 Tashana ‘Munchie’ Roper was killed on Tuesday, after the vehicle in which she was travelling was shot up by gunmen.

Those were the spine-chilling words that a youngster who narrowly escaped death spoke to her grandmother on Tuesday afternoon, after gunmen fired on a vehicle in which she was travelling along Maxfield Avenue. The child's mother, Tashana 'Munchie' Roper, 31, was killed in the incident and her eight-year-old sibling hospitalised.

"A wash mi a wash and mi hear di shot dem and somebody say 'Anyone who get those must dead'. When mi see one a di pickney dem run come and say a Munchie, mi feel a pain inna mi belly," said the senior citizen. According to police reports, about 3 p.m., Roper and other passengers were travelling along the intersection of Rodney Road and Bentley Lane in a vehicle when men in another vehicle opened fire on them. Roper and the minor were rushed to hospital where she was pronounced dead and the child admitted in stable condition. Police investigations continue.

Sitting in her yard on Rodney Road, the woman said Roper was visiting the community when she was killed. She stated that she resided in Denham Town and was on her way to the river with her children and brother when they were attacked.

"Dem don't know her and she don't know dem who kill her. She was my best granddaughter, she don't even talk much. She is not from around here and dem kill her. God know, mi feel it man," she wailed. A few years ago, one of Roper's brothers was shot and injured by thugs. The elderly woman said she is fearful and is thinking of abandoning her home.

THE WEEKEND STAR spoke with a few women along Rodney Road who said they are cowering in fear as an ongoing gang war with Bentley Lane continues to threaten their lives.

"See dem turn pon di woman dem now. The poor girl not even come from here and she dead. Simple as you see across the road, we can't walk go over there or we may nuh come back. Mi see woman who use to live over that side and have family over here can't come over and this is not the way to live," one of the women said.